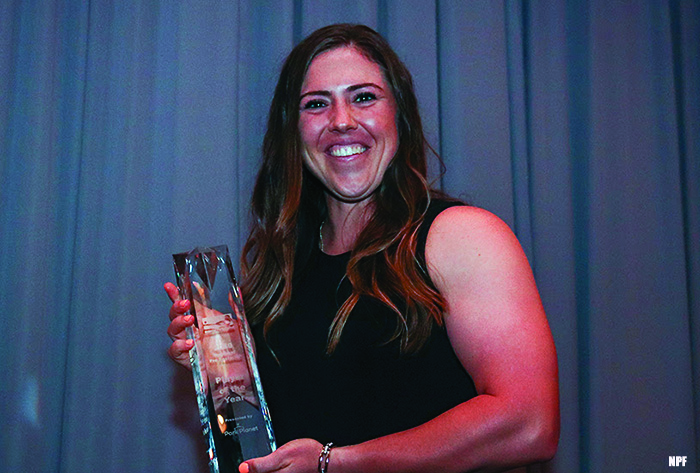 Chidester and the Bandits open play against the USSSA Pride Thursday night, Aug. 15 in game one of the best-of-five 2019 NPF Championship Series at Parkway Bank Sports Complex in Rosemont. First pitch is scheduled for 7:00 p.m. CT. It marks the fourth time in the last five years these two teams will duel for the title with the Pride making their 10th consecutive appearance.

USSSA’s Jolene Henderson earned her second consecutive Diamond Sports Pitcher of the Year Award after the right-hander was 10-4 with 1.99 ERA, 58 strikeouts in a league-high 91.1 innings of work. She tossed two shutouts and one perfect game.

Abbey Cheek, of the Chicago Bandits secured the 805Stats Rookie of the Year Award after the third baseman posted exceptional numbers in her first year at the professional level. The 2019 Schutt Sports/NFCA and SEC Player of the Year became the first rookie since 2007 win the batting title, posting a .378 average at the plate.

Softball America presented the inaugural Legacy Award to Pride veteran outfielder, Kelly Kretschman. In accepting the award, Kretschman announced she would retire at the end of the season. She went on to thank everyone for the opportunities she had been given through playing professional softball in the NPF for more than a decade.

Sammy Marshall of the Cleveland Comets took home the Stolen Base Award presented by Crown Trophy of Boulder, with a league leading 22 thefts.

Outfielder, Victoria Hayward, of the Canadian Wild of Southern Illinois, was named the 2019 recipient of the Jennie Finch Award.

The Chicago Bandits coaching staff of Lauren Lappin, Amber Flores, and Lance McMahon, captured the NPF Coaching Staff of the Year honors after the first-year crew guided the Bandits to the NPF’s regular-season title with a record of 38-7. The award marks the first time for a head coach that also played professionally in the NPF.

Scott Mair received the Umpire of the Year honor, presented by ZebraWeb, as a result of his continued excellence behind the plate and supporting roles as a base umpire.