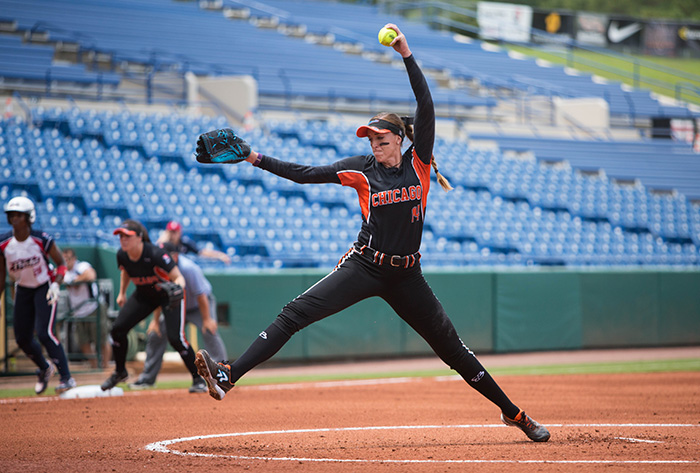 ** The NPF Championship Series Championship Game is still scheduled for tonight at 7:00 pm CT at the Hoover Met Stadium, Hoover, Ala. All elementary, middle and high school students will receive free admission to tonight's game.

HOOVER, Ala. -- In front of a crowd of 1,140, Chicago's Monica Abbott and USSSA's Cat Osterman dueled for seven innings and the Danielle Zymkowitz knocked in the lone run as the Bandits edged the Pride, 1-0 in the opening game of the 2015 NPF Championship Series. After escaping a bases loaded jam in the first, Abbott settled in to earn the complete game victory. She surrendered two hits, struck out five and walked a pair of batters. Osterman picked up the tough luck loss in a complete game effort that saw her allow an unearned run on three hits with eight strikeouts and one walk.

In the first, a walk to Shelby Pendley loaded the bases with two outs, but Abbott bore down and struck out Madison Shipman looking to get out of early trouble. The southpaw was dominant the rest of the way. At one point, she retired 15 straight between the second and seventh innings and a Shipman fly ball to deep left in the fourth was the only other threat of the game.

Zymkowitz's big hit came in the fifth and was set up by a Tammy Williams single and throwing error by Pendley. The Bandits' second baseman sent an Osterman offering back up the middle and Williams came around to score easily when the ball was not picked up cleanly by Pride centerfielder Megan Wiggins.

Game two is Monday night at 7:00 p.m. CT with the Bandits needing just one victory for the title, while the Pride need a win to force a game three.