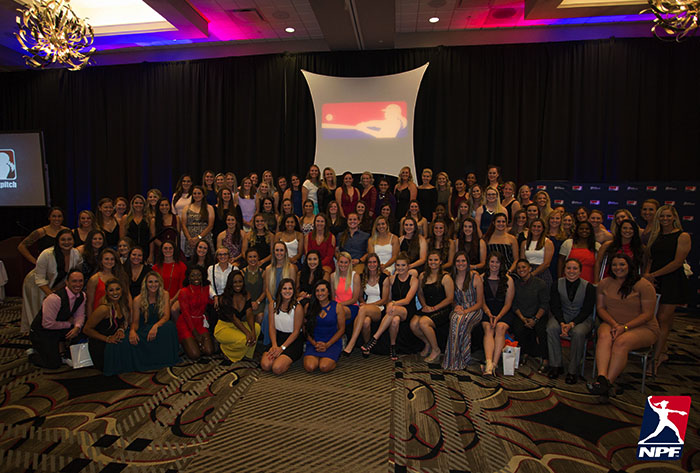 TUSCALOOSA, Ala. – USSSA Pride’s Kelly Kretschman and A.J. Andrews of the Akron Racers made some history on Thursday night as the National Pro Fastpitch held its annual awards banquet.

Kretschman, the league’s first Triple Crown winner, has put together what arguably is the best season in NPF history to earn Player of the Year honors, while Andrews was recognized as the league’s top defensive player and became the first female athlete to win the Rawlings Gold Glove Award.

The USSSA Pride coaching staff, led by head coach Lonni Alameda, was the Coaching Staff of the Year Award, and the Pride took the NPF Cup for winning the league regular-season title (with a 37-13 record) for the third straight year.

When Kretschman accepted her first award Thursday night, League Commissioner and President Cheri Kempf suggested she take a seat closer to the stage.

There was a lot more to come. On a night where baseball royalty was in the house in the form of Hall of Famer Ken Griffey Jr., who made brief remarks to open the festivities, Krestchman commanded the spotlight.

The 36-year-old outfielder for the USSSA Pride collected an unprecedented amount of hardware at the Embassy Suites in the city where she played collegiately for the University of Alabama. Along with Player of the Year honors, Kretschman captured trophies for Offensive Player of the Year and for leading the league in home runs, but that wasn't all.

She also was awarded a special plaque as the league's first-ever Triple Crown winner after leading NPF in batting average (.466), home runs (13) and RBIs (45). Needless to say, she also garnered All-NPF honors.

Kretschman's Pride teammates stood in ovation when she was announced as the winner of the league's top offensive award. When she accepted her second straight Player of the Year crown, the entire sold-out crowd of more than 250 – including competitors for the other three teams in the NPF Championship Series– stood to applaud.

"It's very humbling," said the native of Indian Harbour Beach, Fla. "I appreciate it. I just try to play the game the right way and lead by example and show people the game is fun and you can play it no matter how old you are.”

"I don't care about individual awards. I really don't. I would rather the people who played with me just say I was a good teammate. The other teams standing up and appreciating the kind of year I had means a lot to me, but I hope it's not because of the numbers, but because I play the game the right way."

Kretschman dominated the banquet the way she has dominated the 2016 season. In addition to the Triple Crown, she enters the four-team playoff as the league leader in runs scored (42), slugging percentage (.827), on-base percentage (.563) and total bases (110), and is tied for first in hits (62).

Those numbers add up to the best season by any hitter in league history. It may well be that the 11-year veteran, who was a four-time All-American at Alabama and a two-time Olympic medalist, is the best player in the history of professional softball.

Joey Arrietta, President and General Manager of the Akron Racers, fielded her 15th team this year, and she's never seen a player have a better season.

"No, absolutely not," Arrietta said. "No one has been able to put it together in each category of offense like Kelly has done. No one has had the balanced attack that she has had this year, not only the three categories of the Triple Crown but all the others.”

"When you look at certainly the longevity and her back-to-back Player of the Year awards, that's never been done. You talk about position players – you have to take the pitchers out, that's different entirely – she's the best in the history of this league. She's done it year after year after year, and she's gotten better."

Kempf made sure to tell Kretschman that she didn't want this banquet to be a retirement party.

"I told her, 'If you leave your shoes at the plate, I will chase you down and put them back on,'" the Commissioner said. "Her performance speaks for itself. When you see just the sheer statistics, they put her in a category all by herself."

The banquet also featured an historic moment when Andrews became the first female winner of the Rawlings Gold Glove Award, which has been awarded in Major League Baseball since 1957. The pioneering moment wasn't lost on Andrews.

"Walking up (to accept the trophy), I teared up," Andrews said. "The fact that it is history-making, I'll never forget this.

"It's something that is huge for the sport and the future for women in softball. It is so exciting and so groundbreaking."

Abbott led the first-year expansion franchise to the playoffs with an 18-1 record in the circle and a league-best 0.72 earned run average, while also leading the league in strikeouts with 167.

Fagan hit .392 with nine home runs and 39 RBIs. Andrews and Marshall of the Chicago Bandits led the league in stolen bases with 15 apiece.

Chamberlain was recognized for leadership and humility on and off the field. Finch made a video presentation of the honor.

Courtesy of the NPF and Tommy Deas of the Tuscaloosa News