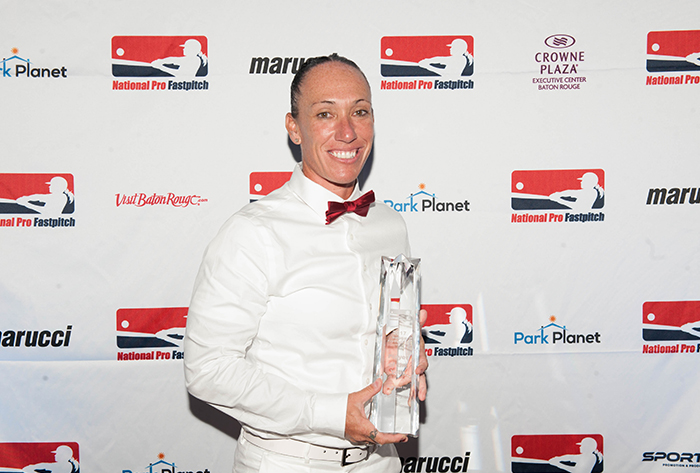 Kretschman, whose Player of the Year award was presented by Park Planet, also won the Best Offensive Performance honor presented by Louisville Slugger after hitting a league-record .500 during the regular season with six home runs and 19 RBI. She led the league in batting, on-base percentage (.623) and slugging (.793), while finishing second in runs scored with 33.

Scrap Yard Dawgs Monica Abbott was selected Pitcher of the Year presented by Diamond, marking the sixth time she's won the award. The former Lady Vol finished 17-3, posted over 200 strikeouts for the third time in her career with 213 and was second in the league with a 1.09 ERA.

The host for this year’s championship, LSU, saw one of its former players recognized as Bailey Landry of the Texas Charge was named Rookie of the Year presented by 805 Stats and the Jennie Finch Award for success both on and off the field. Landry hit .348 for the season (fourth in the league) with 29 runs scored, five home runs, 11 stolen bases and 18 RBI. The Finch Award was started by the league after the personable star pitcher retired in 2010.

A new award was presented by Crowne Trophy for the umpire of the year, Craig Hyde. Hyde has umpired for 38 years and in July was named named the NCAA national coordinator of softball umpires.

Four-time regular season champions USSSA Pride, led by the coaching staff of Lonni Alameda, Craig Snider and Travis Wilson boasted a 40-9 mark. The staff and team members were presented their awards by Vaultz.

A video was shown saluting LSU’s Geaux Teal program and Tiger head coach Beth Torina to raise awareness of ovarian cancer, a program that started small and has grown in numbers of participants and money raised. The NPF will be participating as well with events at Tiger Park during the championship series.

Held on the eve of the annual NPF Championship Series that begins Thursday at LSU’s Tiger Park, the action gears up with USSSA Pride versus the Chicago Bandits at 5 p.m. CT and the Scrap Yard Dawgs and Akron Racers in the 8 p.m. CT nightcap in the best-of-3 semifinals. The championship is set to be decided on Sunday.