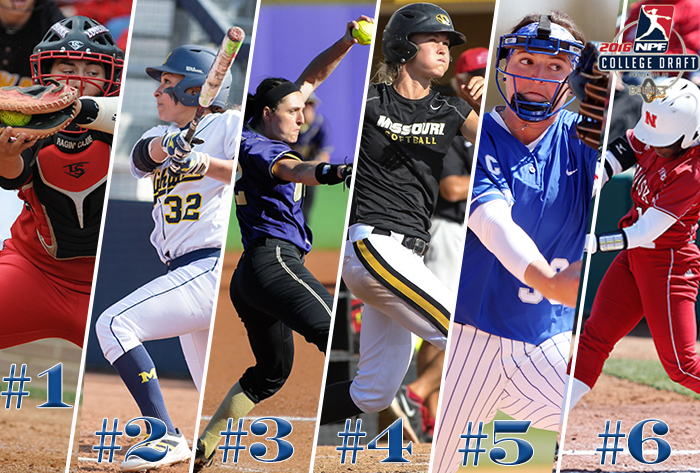 NASHVILLE, Tenn. - Louisiana-Lafayette senior catcher Lexie Elkins was the No. 1 overall pick by the Pennsylvania Rebellion in the 2016 NPF College Draft presented by Bownet on Thursday evening at the CMA Theater in Nashville, located within the Country Music Hall of Fame and Museum. Elkins was the first player from Louisiana and the Sun Belt Conference to be drafted No. 1.

“Lexie was at the top of our list from day one," said PA Rebellion owner Stu Williams. "She does have the power. She rarely strikes out. We are very excited to have her in Pennsylvania. We can’t wait to see how this season unfolds.”

“The philosophy of this draft was to make sure we had kids who could drive the ball,” Scrap Yard Dawgs general manager Connie May said. “We wanted to make sure they were athletes who had speed so we could have a lot of versatility across the field.

The Dallas Charge and defending Cowles Cup champion Chicago Bandits, who did not have first-round picks, made their first selections in the second round, drafting UAB infielder Caitlyn Attfield and UCF pitcher Shelby Turnier, respectively.

In all, 40 college seniors from 27 NCAA programs were selected by the six NPF team over six rounds. Two-time defending champion Florida led the way with four selections, while Missouri, LSU and Oregon followed with three apiece. Georgia, James Madison, Kentucky and Michigan each had two draftees.

James Madison, Iowa State, Troy, UAB and University of Missouri St. Louis (DII) each had their first-ever NPF draftees. Akron's sixth-round pick of UMSL pitcher Hannah Perryman made history. Perryman is the first Division II player to be selected in the NPF draft.

-- Quotes courtesy of the NPF

Quotes from around the country

"Incredible, awesome and surreal were the emotions upon hearing Lexie's name as the No. 1 pick, and to realize that what 'we have already known' – that Lexie is the best of the best – is now known by all. This is an amazing moment in our program's and University's history to have the best in their area recognized nationally.

"I can't put this feeling into words as I am still taking it all in. This is something I have always looked forward to ever since I started my softball career. I am very excited to have the opportunity to continue playing but we still have work to do in my final season at James Madison."

"I feel like a proud father for both Erica and Jailyn. It's great for them to be recognized for all their hard work and dedication. They are two very talented young ladies and I am excited to see that people are appreciating what James Madison is bringing to the softball world."

“I want to thank my parents and family for supporting me. I also want to thank Coach Phil Bradley for being the best mentor I could have ever asked for. Coach Ehren Earleywine, Coach Gina Schneider, Coach Pete D’Amour, the Mizzou Softball support staff and all of my teammates for making me better every day. Mizzou is my second home and being there was the best four years of my life.”

“I wanted to go somewhere that I could help make a name and when I saw my name on the screen for the Scrap Yard Dawgs, I knew I had the perfect opportunity to do that with a brand new NPF organization. I’m so happy that I get the chance to tie up my cleats after my time with Mizzou. I can’t thank this program enough for helping me be the player I am now. Thank you to the entire family for believing in me and chasing me around the last four years and even before that. Thank you to Uncle Randy for being the best angel I could ask for. This is going to be a new experience and I’m excited to see where it takes me. Let that dawg hunt!”

“I’m not sure I can imagine not playing with Emily by my side or Sami playing in front of me, but I’m excited to see where this journey takes us all. Texas here I come!”

"It's crazy, this is what I've always dreamed of. As a little kid, I used to watch the draft myself and to actually be on the screen is just crazy. I definitely want to thank my mom for all the stuff she has been through to get me to this point."

"I am beyond excited to be a Racer! To even be selected, let alone to be the first Division II player, is a dream come true. This is something I've always dreamed of and have worked so hard for. To be able to say that I am a professional softball player is the most amazing feeling."

”What an outstanding honor and recognition for one of the most humble people I know. She plays the sport with the upmost respect and integrity for the game. She strives for excellence in everything that she does. I look forward to her touching many lives out on the professional circuit.”

“I’m excited to have the opportunity to play with this organization, while also being so honored that they believed in me and that I deserved the shot to be a professional athlete. It’s humbling to know that I’m going to be surrounded by so many of the athletes that I, and so many others, have looked up to. I want to thank all of my teammates and the coaches who have helped get me to this point and I cannot wait to join the team later this summer.”

“It was really exciting,” Stokes said. “Everybody around me was screaming and it was surreal to me. I didn’t process at all that I was going to go in the first round. I’m still kind of shaken up about it. I’m really excited about what’s next, and I’m really excited everyone got to be around and witness it. I’m blessed to be able to get to play a game that a lot of people only get to play for four years."

“This is a proud moment for Nebraska softball,” Revelle said. “It is a proud moment to see a player work so hard to maximize her talent and to have that talent be recognized by the NPF. We can’t wait to see Kiki play professionally.”

"This moment is unreal. I've always dreamed of this day happening, but never thought it could be a reality. I'm so thankful for all the coaches and players who have helped me along the way. And of course, the biggest thanks goes to my family, who are my number one fans."