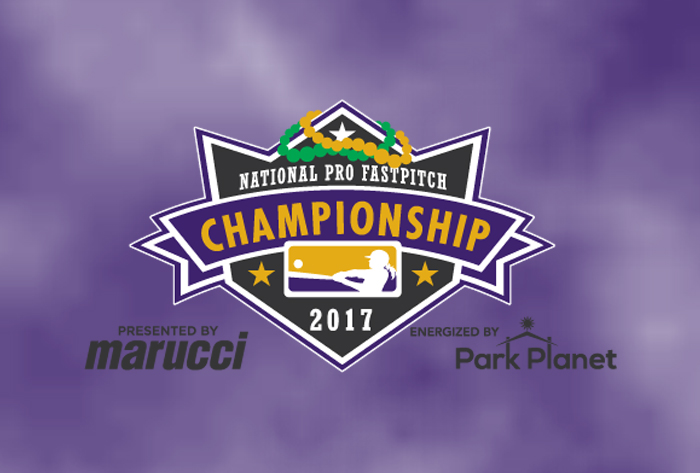 NASHVILLE, Tenn. – National Pro Fastpitch fans will have many options to follow along the action of the 2017 NPF Championship Series presented by Marucci and energized by Park Planet. Through live streaming, live stats and social media, fans will have many opportunities to share the experience of the Series, the league’s hallmark event.

Headlining those options is live streaming coverage of Series action on three separate media outlets that include NPFTV, MLB.com

and The Olympic Channel (TOC). All coverage is offered at no charge to fans. The NPF booth duo of Eric Collins and Barb Jordan will be calling all the live action.

NPFTV, the consistent season-long location for NPF action, will lead the way with the most complete lineup of live streams that will include every game, along with shows between games on Thursday and Friday and pre-game shows on Saturday and Sunday. In addition, NPFTV will host the annual NPF Awards Banquet live on Wednesday night.

will provide pitch-by-pitch converage of the 2017 Championship Series presented by Marucci and energized by Park Planet. It marks the first time MLB.com has been a viewer option for live game coverage of the Championship, although the platform has hosted a number of regular season games over the past two years. In addition to the live stream coverage, MLB.com

The Olympic Channel rounds out the options as it will feature all games on Thursday, Friday and Sunday, including Sunday’s “If Necessary” final game. The 2017 Series also marks the first time TOC will host NPF Championship coverage, although NPF regular season action debuted on the much touted platform in 2017.

Various social media platforms will also provide thorough coverage of the Series. Facebook, for the first time in Championship history, will feature “Live Look-ins” for an inning at a time along with scoring updates. Twitter will feature inning by inning tracking of the action and Instagram will expose fans to “Scenes of the Series” through short videos and pictures. Special Championship Series templates will be options for fans and players alike to use on Snapchat.

Rounding out the options is the link to live stats presented by 805 Stats, the league’s exclusive provider for in-game stat action. Live stats will be accessible through the league championship website or through the NPF app, which is available for download. On game days, links to stats will be made available on Twitter and Facebook.

Additionally, participating teams and players will be carrying unique content on their respective team and personal social media pages and websites.

The 2017 NPF Championship Series presented by Marucci and energized by Park Planet will lead off action on Thursday at 5:00 pm CT.

A complete list of the Championship Series coverage is as follows: