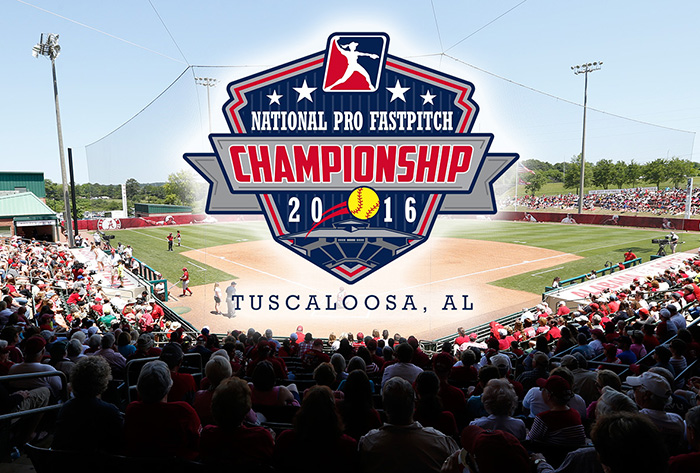 TUSCALOOSA, Ala. – Championship Series Week for the National Pro Fastpitch League has finally arrived. Preparations for the five-day event began on Monday and include a complete aesthetic makeover to the University of Alabama’s, Rhoads Stadium.

Ancillary events surround the Series and kick off Thursday with the league’s annual Awards Banquet hosted at the Embassy Suites in downtown Tuscaloosa.

The top four teams in the league, based on the 150-game regular season schedule, will converge on Tuscaloosa in pursuit of the coveted Cowles Cup Trophy. The field of teams in the 2016 Series includes the regular season Champions and #1 seed in the Series, USSSA Pride; #2 seed and newest franchise in the NPF, Scrap Yard Dawgs; #3 seed and 2015 defending Cowles Cup Champions, Chicago Bandits; #4 seed, celebrating their 15th season in professional softball, Akron Racers.

The Series design yields three, best-of-three series that will kick off with Chicago versus Scrap Yard Friday afternoon at 5:00 p.m. CT followed by USSSA versus Akron at 8:00 p.m. CT. The second round of those match-ups will continue Saturday. Sunday afternoon at 4:00 p.m. CT will begin the Final Series between the winners of the first set of series. The champion will be crowned either Monday night or Tuesday night, depending on whether the outcome is determined in two or three games.

Fans will be able to play along with all the action and test their softball acumen through a brand new relationship between NPF and Micro Fantasy Softball, penned in early August. Micro Fantasy, the official interactive app for the 2016 NPF Championship Series will be showcased from the very first pitch on Friday through the last pitch of the Series. The interactive game can be played through a downloadable app or the internet. The game is free, live, and includes play by play predictions chosen through a simple ten choice option screen. Through outcome prediction accuracy, fans will earn points and win prizes during and after every Championship Series game.

The Annual NPF Awards Banquet begins at 6:00 pm CT Thursday August 18 with a reception, followed by the banquet itself, which starts at 7:00 p.m. The banquet is an event that is open to the public, but tickets have been sold out for more than a week. The Awards Banquet recognizes and celebrates the accomplishments and performances of teams, coaches and players for the 2016 season. The Awards Banquet will be highlighted this year when Rawlings Sports will announce the first ever female Gold Glove Award winner.

The Championship Fanfest will take place in the upper parking area of the event venue, just outside Rhoads Stadium. Official partners and suppliers to the NPF will be set up for demonstrations, interactive opportunities and event souvenir sales. Fanfest will open two hours prior to the first game of the day Friday through Sunday.

USA Elite Select will be holding an invitation-only evaluation camp that will host over 450 amateur softball players in six graduating classes that range from 2017 to 2022. The Select 30 All American Camp will be held at Bowers Park in Tuscaloosa, Friday through Sunday, and boasts a unique set of testing and measuring techniques and technology that has never before been applied to softball skills evaluations. The Select 30 Camp will culminate on Sunday when the top 15 athletes from each class are announced in Rhoads Stadium, prior to Game 1 of the NPF Championship Final Series that begins at 4:00 p.m. CT.

Players from the Dallas Charge and Pennsylvania Rebellion will be on hand throughout the Series for various promotional activities, including autograph signings and appearances in Fanfest and at various locations inside Rhoads Stadium. Those players include former Women’s College World Series Most Outstanding Player, Lauren Haeger, of the Dallas Charge, and the 2016 #1 overall NPF College Draft pick, Lauren Elkins, of the Pennsylvania Rebellion.

All scheduled games of the NPF Championship Series, (except Game 2 Friday), will be carried live nationally on CBS Sports Network. In the event that either of the first round series’ pushes to a third game, those games will not be aired live on CBSSN. However, Friday night’s Game 2 and the “if necessary” games of the initial series’ can all be watched live on NPFTV.