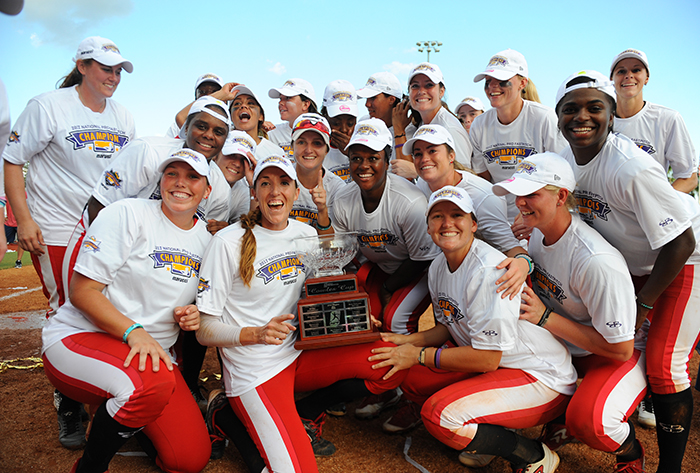 Baton Rouge, La. -- Scrap Yard Dawgs claimed their first Cowles Cup in franchise history with a 5-2 win over the USSSA Pride in the winner-take-all contest of the final series in the 2017 NPF Championship held at Tiger Park on the LSU campus.
Rookie Kasey Cooper charged the offense with three RBI, the bulk coming on a two-run home run in the sixth inning that gave the Scrap Yard Dawgs (35-19) the lead for good.
Monica Abbott tossed her second complete game of the afternoon, limiting the Pride to two runs on four hits, while striking out 11. It was Abbott’s two-hit, 14-strikeout performance earlier in the day that forced the decisive third game.
Abbott was named MVP of the NPF Championship series. Over the course of the Championships, the southpaw limited foes to 15 hits and struck out 56 over 29 innings.
The Pride (43-11), who received a leadoff homer from Megan Wiggins for an early advantage, reclaimed the lead in the bottom of the third after Kirsti Merritt delivered a two-out RBI single to score Sierra Romero.
Angel Bunner relieved starting pitcher Kelsey Nunley in the fourth inning and retired the side in her first two innings of work, but yielded the go-ahead homer to Cooper in the sixth inning.
The Scrap Yard Dawgs gave Abbott additional breathing room in the top of the seventh. Meagan May Whitley led off with a solo shot that landed in the left field berm and Cooper later drew a bases loaded walk to force home a run that stretched the lead to 5-2.
Abbott finished the game off in style with consecutive strikeouts of Romero and pinch hitter Gionna DiSalvatore.
Kayla Winkfield led the way with two hits and five others contributed one apiece as the Scrap Yard Dawgs totaled seven in the contest.
-- Courtesy of NFP