Champions Crowned at 16U and 18U GOLD National Championships 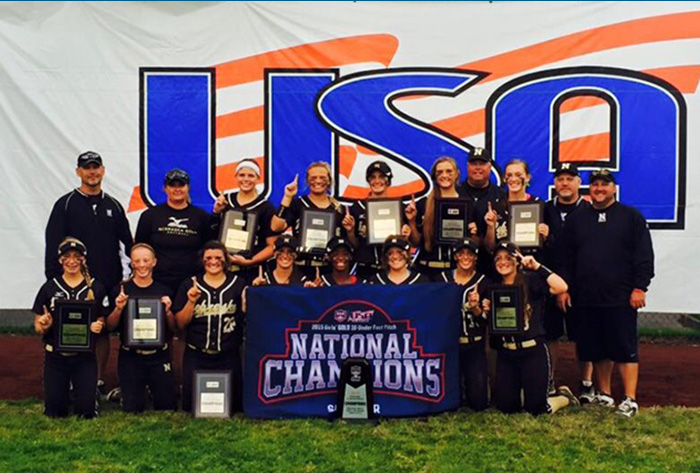 SALEM, Ore. – Champions were crowned at each of the 16-Under and 18-Under Fast Pitch GOLD National Championships, in Salem and Hillsboro, Ore. on late Saturday evening. Nebraska Gold (pictured), out of Region 12, defeated Originals-Self to win the 16U GOLD. At the 18U in Hillsboro, the Beverly Bandits, out of Region 9 and Ohio ASA/USA Softball, beat the Marucci Patriots 3-2 in a closely contested National Championship.

However, game two was different. Strong pitching by Olivia Ferrell held Originals Self scoreless for seven innings to boost Nebraska Gold to a 3-0 victory, which earned them the 16U GOLD National Championship. Coutney Sandell was 1-3 and scored one run.

“I’m just really proud of our team and how we came together this year,” said Sandell. “We’ve had our rough patches and we pushed through it this tournament. I just couldn’t be happier with how we performed. I just love this family and they mean everything to me.”

In total, Nebraska Gold went 9-1 throughout the entire tournament. They dominated not only the bracket, but also pool play, outscoring opponents 21-4 while going 3-0. Their only loss was in the first game of the National Championship.

“I’m very proud of how the team handled themselves all week,” said Nebraska Gold head coach Mike Heard. “I’m also proud of how we bounced back and handled the adversity of losing the first game of the Championship. Something we’ve talked about all year was building on the positive and not the negative. Courtney Sandell had a great tournament and was one of the key players to our success this week. I’d also like to thank the Salem and the tournament directors for this tournament. It was an amazing experience out here.”

The National Championship game was tightly contested, as the Beverly Bandits jumped out to an early 1-0 lead in the top of the second. Haley Dominique got on base with a single, before she showed off her base running abilities. Dominique stole home on a wild pitch. A couple of runs for the Marucci Patriots late tied up the score at two as the game entered the seventh inning. Fans were in store for an exciting finish, as Caitlyn Robinson tagged up to score the game-winning run on a Dominique fly ball to deep center field. Dominique went 3-4, brought in two RBI and scored once herself. The Beverly Bandits won the National Championship game 3-2.

“It was a privilege and an honor to play in the 18 GOLD against awesome teams and in these exceptional facilities in Hillsboro,” said Beverly Bandits head coach Rona Dorsey. “Our team fought hard together and it was an amazing experience. Thanks to everyone who put this tournament together.”

The Beverly Bandits went 2-0-1 in pool play, before winning six straight en route to the National Championship. They outscored opponents 46-10 in bracket play.

To relive moments from the 16U GOLD click here

. For complete schedules and brackets from each of the GOLD National Championships, click here