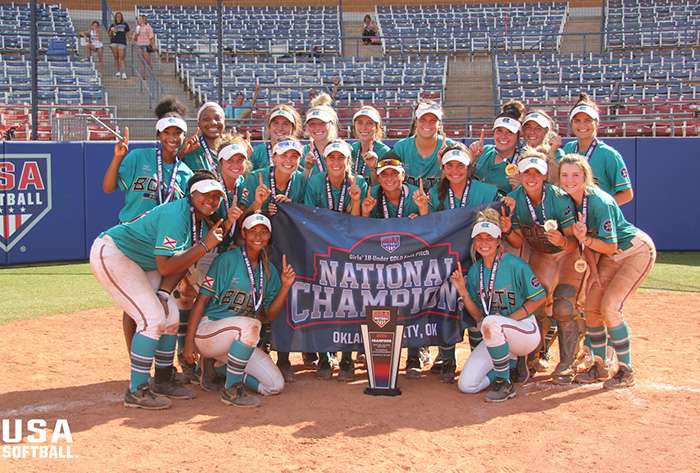 Continuing the momentum from an 8-5 come-from-behind win over the Bombers, Hotshots scored five runs on ten hits to post a 5-2 victory over the Breeze and force an if-necessary game. They followed that with a 9-1 (six innings) run-rule victory and were crowned the champions. California Breeze Birch (second) and Texas Bombers Gold Burgess (third) rounded out the top three in the 16-Under division.

With four teams remaining in the 18-Under title hunt, Birmingham Thunderbolts (pictured main page) came out on top of the group that also consisted of the Corona Angels, Hotshots Premier Dumezich and Nebraska Thunder Gold.

In the championship clash, Hotshots Premier Dumezich forced an if-necessary game with a 5-4 extra-inning triumph. The Thunderbolts grabbed an early 3-0 lead in the winner-take-all contest. A fourth-inning two-run homer by Hotshots’ Samantha Graeter made it a one-run ball game. The 3-2 score line would hold out as both pitching staffs tossed zeros the rest of the way, lifting the Thunderbolts to the championship.