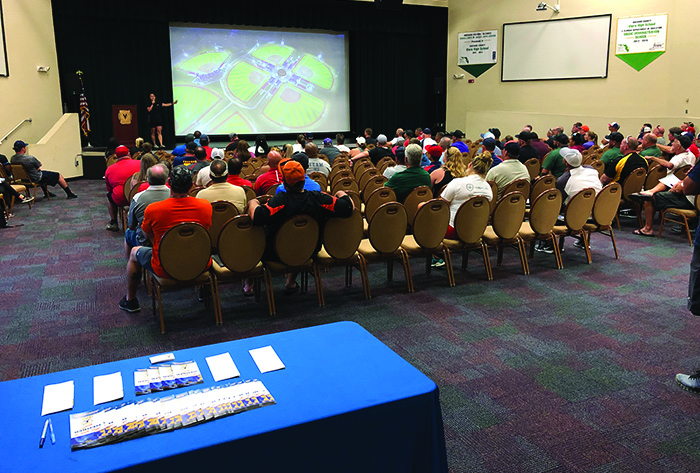 LOUISVILLE, Ky. - The NFCA connected with the travel ball community during July to create awareness about the many educational offerings the Association provides to benefit grassroots coaches.

The NFCA visited three tournaments hosted by Official Sponsors – USSSA, Legacy Event Management and USA Softball. Valuing its partnerships with this trio, the Association is appreciative for its opportunity to address the travel ball community, discussing topics such as mentoring, the 2019 NFCA Convention in Atlantic City, recruiting legislation and membership benefits.

“The travel ball community is very special to the NFCA,” said Executive Director Carol Bruggeman. “Coaches at the grassroots level have a great deal of influence on student-athletes and ultimately the growth of the game.  The NFCA is committed to serving travel ball coaches in their quest for excellence.  A special thank you to NFCA Official Sponsors Legacy Event Management and USSSA, as well as Official Convention Sponsor USA Softball, for providing us the opportunity to visit with your valued coaches."

Prior to the Space Coast World Series, an 80-team tournament held July 1-6 at the new Space Coast Stadium and Complex in Viera, Fla., NFCA Travel Ball liaison Emily Allard met and spoke with coaches during their pre-tournament meeting. She focused on the benefits for youth coaches as well as the opportunity to gain valuable knowledge at any of the NFCA’s eight Coaches Clinics.

USSSA, the lead on the NFCA’s Coaching Tools package (special benefit for our youth coaches) announced a special “Summer Edition” of the Coaching Tools to be released to our grassroots members soon.

“Our partnership with USSSA and its staff has evolved over the last few years and we are excited to continue working with them to educate our youth coaching community,” said Allard. “It’s always a privilege to be in front of the same coaches who helped mold and shape me as a young player.” 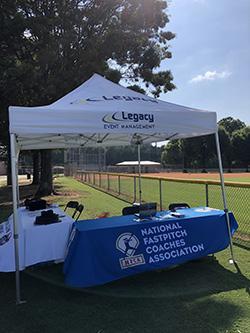 At the Atlanta Legacy Showcase in Powder Springs, Ga., Allard attended the check-in registration, which allowed her to mingle with coaches and discuss membership benefits, recruiting legislation and the upcoming Convention. The Showcase featured 320 teams, ranging from 14U to 18U, competing in a single-elimination tournament at several area parks from July 10-14.

Legacy, which hosted the Convention’s Hall of Fame After Party the past two years, is transitioning to a new sponsorship. Legacy will now be the title sponsor of all social hours at the NFCA Coaches Clinics.

"We are grateful for our partnership with Legacy Event Management and enjoyed their hospitality down in Georgia,” said Allard. “Mingling with their coaches at check-in was a great opportunity for the NFCA to be 'on-the-ground' at the grassroots level. Legacy always puts on a "splash" at our Convention and they certainly did not disappoint in their own tournament!"

Rounding out the educational awareness tour, Allard ventured to USA Softball’s Junior Olympic Cup, a 90-plus team event, in Spartanburg, S.C. Allard, alongside NFCA Vice President for Education and Team USA U19 Coach Heather Tarr, spoke at the tournament’s coaches meeting, promoting the value of the NFCA’s membership benefits, including the vast networking and mentoring opportunities, as well as the NFCA’s Regional Coaching Clinics.

USA Softball is the title sponsor of the Convention’s Softball Summit, while NFCA helps with several of their education initiatives, including the ACE program.

"Our partnership with USA Softball is centered around the growth of the sport,” Allard said. “Through ACE programming and NFCA membership, our organizations continue to work together to educate grassroots coaches. We appreciated the opportunity to speak to the coaches in attendance at the JO Cup in spreading the awareness of the work being done off the field to support them."