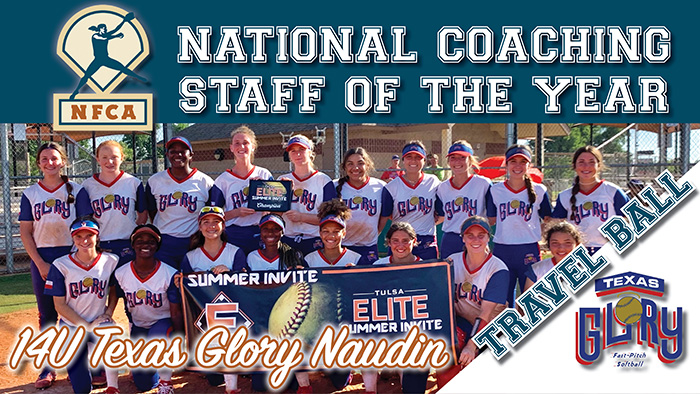 LOUISVILLE, Ky. – 14U Texas Glory Naudin, under the direction of head coach Mariah Haygood and assistant coach Lee Velazquez, has been voted by its peers as the 2021 NFCA Travel Ball National Coaching Staff of the Year, announced the Association on Monday afternoon.

Haygood and Velazquez steered the Glory to three first-place finishes this summer, claiming titles at the Tulsa Elite Invitational, Texas Glory Summer Shootout and the TFL Summer Championship. They also earned a final four showing at the rain-shortened Top Club Nationals and placed fifth at Alliance Nationals. Their summer success earned the team an overall ranking of fifth in the Post Summer Extra Elite 100 14u Club Team rankings.

Haygood and Velazquez will be honored in front of their peers during the Awards Brunch on Dec. 11 at the 2021 NFCA National Convention in Las Vegas.