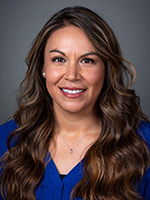 Director of Events and Convention Coordinator

Michelle Vasquez joined the NFCA in June 2012. She was promoted to Director of Events in 2015 and added Convention Coordinator to her title in 2019. In this role, Vasquez oversees the direction of the NFCA National Convention, Coaches Clinics and Leadoff Classic Tournaments, along with serving as the liaison for NJCAA, Cal JC and NWAC coaches and Events Committee.

Vasquez has her hands busy when it comes to the NFCA’s annual marquee event. She coordinates the Convention’s programming, which includes schedule, room layout, hotel, food and beverage, audio visual, future site planning, and much more. She acts as the lead on all Leadoff Classics, working closely with the host sites, coordinating umpires, overseeing on-site setup and managing staff travel. Vasquez oversees the NFCA’s Junior College All-America process as well as all other major NFCA Junior College awards.

Vasquez enjoyed a four-year playing career at the University of Louisville from 2003 to 2006. Serving as the Cards’ second baseman, she helped Louisville to three NCAA Regional appearances and three 40-win seasons.

The Claremont, Calif. native graduated from Louisville with a bachelor’s degree in 2006 and a master’s in Sports Administration in 2012.