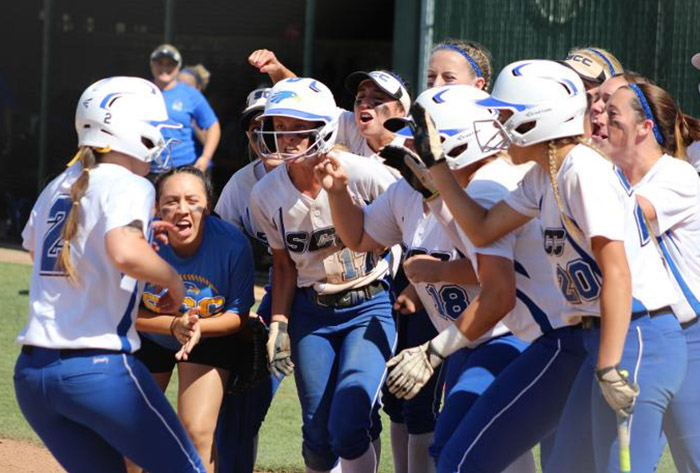 BAKERSFIELD, Calif. - Santiago Canyon College, the #2 seed out of Southern California, won its first-ever softball State Championship on Sunday afternoon with an 8-0 victory in five innings over NorCal #3-seed Sacramento City College. The Hawks (41-9) became the first team to lose their first game of the weekend and come all the way back to win the State Championship in 20-plus years, and the first to win at state title via a mercy rule since 2005.

Santiago Canyon picked up in the seventh of final game of the weekend right where they left off the sixth. The Hawks exploded for five runs in the bottom of the first. All-Tournament selection and sophomore Emili Olague opened the scoring with a pair of RBI on a single that traveled all the way to the wall in left-center. Two at-bats later, tournament Most Valuable Player Kaitlyn Lanksbury launched a three-run shot over the center field wall to make it 5-0.

In the win, Most Valuable Pitcher Riley Nahrwold (20-7), allowed up seven hits, didn't walk any, and struck out one. Daniel finished 2-for-2 at the plate, while sophomore Jordaen Hicks was 3-for-3 with a pair of scores. The Panthers (36-10-1) were paced by sophomore Madison Butcoff and freshman Gabby Ortiz, who both went 2-for-3.