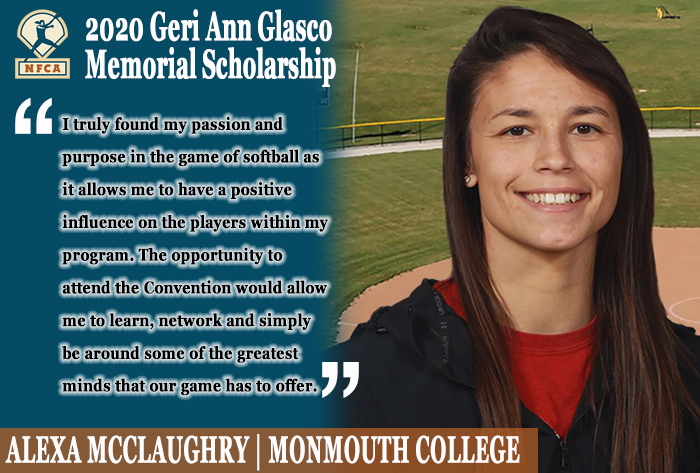 LOUISVILLE, Ky. — The National Fastpitch Coaches Association is pleased to announce Monmouth College’s Alexa McClaughry as the 2020 recipient of the Geri Ann Glasco Memorial Scholarship, created in partnership with the Natasha Watley Foundation (NWF) and the Glasco family.

The scholarship is awarded to a female coach in her first five years of coaching who shows a commitment to growing the game of fastpitch in her communities and has a need for financial assistance to attend the Convention. It is dedicated to remembering Glasco, an aspiring coach and elite former student-athlete, who lost her life on Jan. 24, 2019 in Lafayette, La.

“I truly found my passion and purpose in the game of softball as it allows me to have a positive influence on the players within my program,” said McClaughry. “As a coach, I want to learn and develop my own skills to better assist my players in their pursuits.”

McClaughry’s coaching career began when she was hired as an assistant coach at RMU-Springfield for the 2018 season. She took over the program on an interim basis at the beginning of April and guided the Eagles to a berth into the United States Collegiate Athletic Association (USCAA) Softball Championship. However, McClaughry spent 2019 developing student-athletes as too many injuries canceled the season.

In 2020, her coaching tenure at MacMurray College came to a halt. The season was canceled after six games due the COVID-19 and then the university closed its doors in May. McClaughry was hired as the 15th head coach in the history of Monmouth College softball in May of 2020.

“Over the past few years, I have been able to attend a couple of clinics, but have never had the opportunity or finances to attend the National Convention,” McClaughry said. “Being at my third school in three years, especially without a full season, has presented several challenges in being able to establish myself, build a program, and effectively network with other college coaches. The opportunity to attend the Convention would allow me to learn, network and simply be around some of the greatest minds that our game has to offer.”