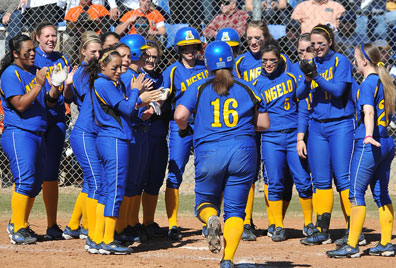 STARKVILLE, Miss. – For the fourth straight week the Angelo State Rambelles have been tapped as the best softball team in the nation, according to the latest NFCA Division II Top 25 Poll that was released by the Association on Wednesday.

Angelo State (20-1) garnered nine of the 16 first-place votes this week, while finishing four points ahead over new No. 2 Alabama-Huntsville. The Chargers (22-1-1), who moved up from third to second, were the recipients of the other seven first-place votes. Alabama-Huntsville made its jump after going 8-0 last week, including a doubleheader sweep of then No. 2 Valdosta State.

After going 3-0 last week, Midwestern State (27-2) made a significant jump in the rankings, moving from fifth to third. Rounding out the top five this week was Valdosta State (12-4) and North Georgia (28-8) who came in at fourth and fifth, respectively.

For the first time this season, there was a tie in the poll. Both Missouri Western (20-5) and Emporia State (18-5) received 47 points, tying them for the 25th and final spot in this week’s poll. The ranking marks Emporia’s first appearance in the poll in a month, due in large part to victories over Missouri Western and then No. 23 Nebraska-Omaha at the MIAA Crossover last weekend.