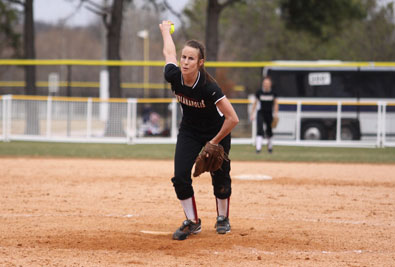 STARKVILLE, Miss. – Angelo State junior DeeshanaLynn Tafiti and Indianapolis sophomore Jennifer DeMotte have been names as the NFCA Division II National Player and Pitcher of the Week, respectively, for game played February 14-20, 2011.
Tafiti had a big week for the Rambelles, as she went 10-for-19 with five runs, 10 RBI, a double, a triple and two home runs. She finished the week with a .526 batting average, a .571 on-base percentage and a slugging percentage of 1.000.

The Kalaheo, Hawaii native had two three-plus RBI games on the week and led her team in both slugging and on-base percentages. Currently this season, Tafiti is hitting .408 through 15 games and is leading Angelo with 19 RBI.

The second-ranked Rambelles are off to their second best start in program history at 15-0, trailing only their 2003 team that began that season at 19-0. So far in the 2011 campaign, Angelo has outscored its opponents by an astonishing 110-29 margin.

DeMotte helped the Greyhounds get off to a 6-0 start a last week’s Charger Chillout in Decatur, Ala., by earning five of her team’s six wins in the circle. She finished the week with 0.35 ERA and allowed just one run off of 14 hits, while striking out 25 and walking only six.

The Indianapolis, Ind., native recorded a season-high nine strikeouts against West Alabama and notched two complete game shutouts on the week. DeMotte also get it done from other side of the plate as she went 14-for-21 for a .667 batting average.

After their 6-0 start last week, the Greyhounds vaulted from not receiving any votes to ninth in the latest NFCA Division II Top 25 poll. Indianapolis will return to Alabama this week for a pair of games with North Alabama on Friday, followed by a doubleheader showdown with No. 4 Alabama-Huntsville on Saturday.

Other Top Performances
Emily Kennemer of East Central went .500 against Pittsburg St. on the week, including hitting for the cycle on Saturday… Midwestern State’s Kristina Guiterrez threw a no-hitter against Eastern New Mexico and limited opponents to a.027 batting average on the week… Jamie Keltz of Indianapolis drove in nine runs, hit three home runs and stole five bases… Camille Gato of UC San Diego picked up two wins for her team while striking out nine.