Bruggeman honored as an LBF 2022 Most Admired CEO 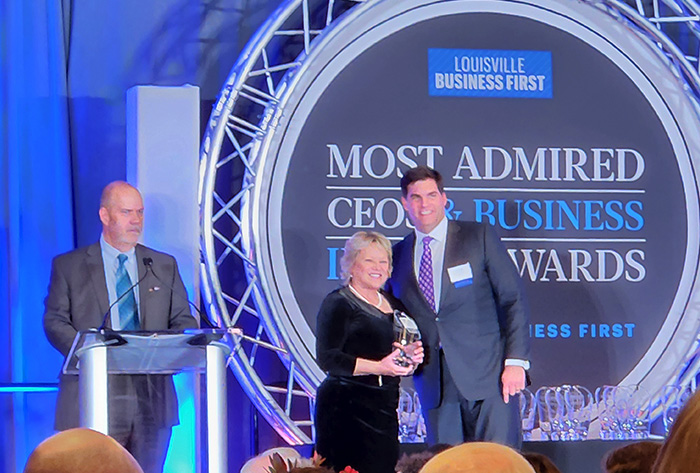 LOUISVILLE, Ky. – NFCA Executive Director Carol Bruggeman was recognized as one of Louisville Business First’s (LBF) 2022 Most Admired CEOs. Bruggeman was honored in front of her peers and colleagues during a reception and dinner on Thursday evening at the Galt House-Archibald Cochran Room.

Since taking the role as interim Executive Director in September of 2015, Bruggeman has overseen a tremendous growth in the organization. Membership has grown 63 percent, sponsorship revenue has increased 433% percent, and events have increased in both the number offered and overall attendees during Bruggeman’s tenure. Part of the increase is due in part to the joint membership initiatives with the NJCAA, California Community College Fastpitch Coaches Association, and various state High School Associations as well as a grassroots pilot program.

The award recognizes CEOs who are innovators, standard-bearers, role models and exceptional leaders. Their contributions impact the company they head as well as the community in which they serve. A commitment to financial success, quality, workplace wellness, diversity and philanthropy are hallmarks of an exceptional and admired chief executive.

"I am truly humbled and honored to receive this award,” said Bruggeman. “Thank you to the NFCA team for the nomination and to Louisville Business First for the distinguished recognition. A leadership award is a direct reflection not of the leader, but instead of the people he/she serves. I am blessed to work with a talented, driven, invested team at the NFCA and to serve fastpitch coaches across the country."

Bruggeman's leadership was critical during COVID.  While shepherding the Association through a challenging pandemic, she maintained a full-time staff and continued business relationships with all sponsors and partners.  After dipping below 3,500 members during COVID, the Association set a record high for overall membership in October 2022 and currently stands over 6,300. She also led the charge in bringing back and executing a thriving in-person annual Convention in December 2021 in Las Vegas with over 1,500 attendees and 138 companies in the exhibit show.

In addition to the membership regrowth after COVID, the NFCA had to shift its focus following the cancellation of the 2020 softball season. Weekly virtual educational offerings (coaches clinics, webinars and mentoring sessions) were added to the docket, while also giving back to the membership  with the implementation of "Building Champions: A Week of Giveaways." This initiative, during what would have been the 2020 WCWS, rewarded member coaches with prizes such as membership extensions, Convention registration and NFCC course registration, along with the grand prize of two 2021 WCWS Championship Series tickets.

Bruggeman has presided over three of the highest attended National Conventions and was pivotal in the acquisition of the National Softball Coaches Clinics in 2017. Legal counsel as a member benefit, Coaching Tools education for Grassroots members, year-round coach mentoring program, expanded coach and student-athlete awards program and increased scholarship opportunities are just a sample of the growth across the Association’s platforms. Finally, implementing the prestigious and longtime “baseball only” Rawlings Gold Glove awards for the sport of softball in 2022 was the newest and most visible addition to the awards program.

Bruggeman has accomplished all this while enjoying her time as a color analyst throughout the softball season for ESPN, highlighted by assignments for NCAA Regionals and Super Regionals. Prior to her serving as Executive Director, Bruggeman was a successful Division I softball coach at University of Michigan, Purdue University and University of Louisville.