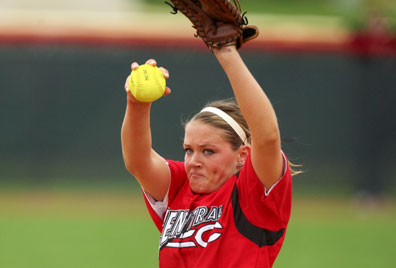 Central pitcher Kiley Lythberg has been named the NFCA Division III National Player of the Week for games played February 15-22, the Association has announced. The senior helped the No. 10-ranked Dutch to a perfect 10-0 week to extend their winning streak to 14 straight.

Lythberg posted a 4-0 mark with a 0.84 earned run average in five starts. She yielded just three runs in 25 innings, allowing 12 hits and five walks while striking out 23 batters.

In a three-inning appearance versus then-No. 18 Wisconsin-La Crosse, Lythberg gave up just two hits and no runs in a 10-1 win. Later in the day, she pitched a complete game 5-4 win over La Verne, giving up three hits. She also had a career-high 12 strikeouts against Schreiner (Texas).

Lythberg also hit .440 for the week as the team’s designated player, driving in seven runs.

The Mount Prospect, Ill., native was also named the Iowa Conference Pitcher of the Week.