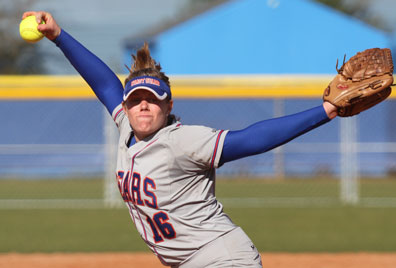 Coast Guard pitcher Hayley Feindel has been named the NFCA Division III National Player of the Week for games played February 7-14, the Association has announced. The junior All-American helped the No. 12-ranked Bears to a perfect 10-0 start at the Rebel Games in Kissimmee, Fla.

Feindel was absolutely dominating as she went 10-0 and allowed just one run in 65 innings for a gaudy 0.11 ERA. She threw 55 consecutive scoreless innings to start the season, fired nine complete games, eight shutouts, a no-hitter, a combined no-hitter, a pair of one-hitters an four two-hitters during the week. She allowed just 20 hits while walking 15 and striking out 118 batters.

She became the NEWMAC’s all-time strikeout leader last week, breaking the record of 850 strikeouts in a career held by Nan Duga of Springfield from 1998-2001.

Feindel now has 867 strikeouts in her career which ranks her 15th all-time and first among active pitcher in Division III.

She also broke the school records for wins in a career last week passing Katie Wunderlich (1998-2001), who won 68 games. Feindel is now 76-16 in her career with 35 shutouts and seven no-hitters.

The River Ridge, La., native was also named the NEWMAC Pitcher of the Week.