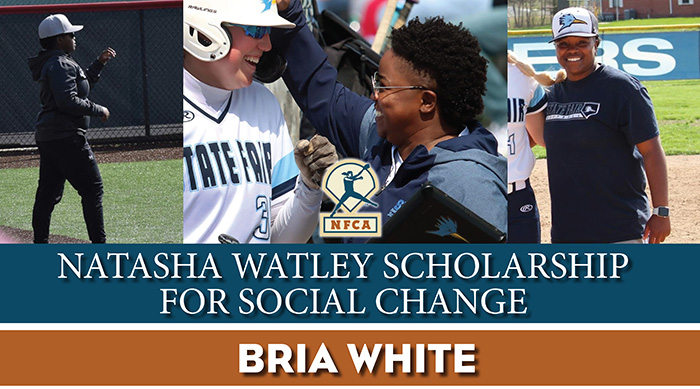 The scholarship is awarded to a Black coach who has created educational or athletic opportunities for their community, has removed and overcome obstacles through social change, or has opened doors for growing the game of fastpitch for Black girls or women.  The scholarship is presented to an individual who embodies courage and commitment to break down barriers, create change within our sport, and has a need for financial assistance to attend the NFCA National Convention.

White will receive a 2022 NFCA Convention registration, travel reimbursement up to $700 and up to four nights paid at the Convention host hotel in San Antonio.

White has served on the State Fair CC coaching staff for the past three seasons. White is involved in all aspects of the program, going above and beyond the duties of a volunteer. Not only does she arrive for morning weights, but she assists with the planning of practices, conditioning and works with the hitting groups. Her game-day duties include working with the outfielder and catchers, keeping stats and dugout management during the contests. Her duties have expanded over the years, as she spends her time during the summer working camps (for no compensation) and assists with recruiting.

In addition to State Fair, White an assistant coach with the Mid-MO Evolution Travel team the past three years. According to head coach Mykenzie Livesay, White goes above and beyond to make sure the practice and game days run smoothly, while simultaneously creating an empowering environment for the athletes.

“Bria has the ability to create meaningful relationships and extend a firm hand in order for our team to grown as both adults and softball players,” said Livesay. “Not to mention, she is usually the first one at the practice and the last one to leave. This is a testament to Bria emphasizing important life skills, while also showing she would do anything in order for her athletes to succeed. Bria has never asked for compensation. She chooses to do it because she loves the girls.”

Livesay continued about White’s love of softball. “She brings a lot of passion to the field, allowing our girls to feel like someone always has their back.”

When White is not coaching, you can find her behind the plate or on the field as a certified umpire, which has allowed her to learn more about the game, while also making a positive impact on other athletes.

“I truly admire her passion and commitment to exert her best self in all assigned tasks,” said Livesay. “I consider her a great asset to the team and I truly believe there is no better candidate for this award.”