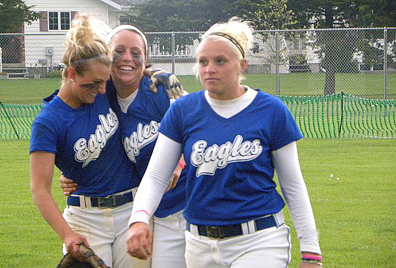 STARKVILLE, Miss. – The NationalFastpitch Coaches Association is proud to announce the names of 32 student-athletes from 13 different institutions that have been named to one of the two 2011 Louisville Slugger/NJCAA Division II All-American teams.

The first honoree from Kirkwood was pitcher Amanda Lambrecht.  Lambrecht, now a two-time first-team choice, turned in the third lowest ERA in the nation at 1.00 and struck out a nation-leading 305 strikeouts this season.  Lambrecht’s catcher Jena Malmen was also honored after hitting .398 on the year with 74 RBIs.

Two other Eagles also earned first-team All-American status this season, infielders Jami Miller and Melissa Walls.  Miller, who joins Lambrecht as a repeat first-teamer, batted .381 this year with 73 runs, while Walls hit .438 with 83 RBIs, the most in the nation.

The two other teams with multiple first-team honorees this season were national semi-finalists Kankakee and South Mountain, who tallied three selections each.The first selection for Kankakee was pitcher Lauren Huber.  Huber went 25-5 on the year for the Cavaliers with a 1.62 ERA and 186 strikeouts.

Catcher Brianna DiGioia and outfielder Kelsey Gass were also honored for Kankakee this season.  DiGioia turned in a .434 clip this and drove in 66 runs, while Gass had 67 RBIs and scored 65 herself.

Tina Schulz of LSU-Eunice was the national champion Bengals’ lone selection to the first-team. Schulz had an ERA of 1.50 this season with 123 strikeouts, 23 wins and just four defeats.

Also earning infielder honors on the 2011 first-team was Chelsea Kurnat of Muskegon, Cheyenne Adams of Phoenix, Chelsey Rottinghaus of Labette and Morgan Allee of Iowa Central. Kurnat stole 47 bases for the Jayhawks in 2011 in addition to hitting .416, while Adams batted .500 and had an on-base percentage of .559.

Rottinghaus, the final two-time All-American namedto this year’s first-team, finished in the top 10 in the nation in RBIs with 69 this season, while Allee turned in the nation’s fourth-highest batting average at .524.

The final honoree this season was outfielder Josi VanHouten of Ellsworth.  Ellsworth ended her final campaign with the Panthers by stealing 36 bases and scoring 54 runs.