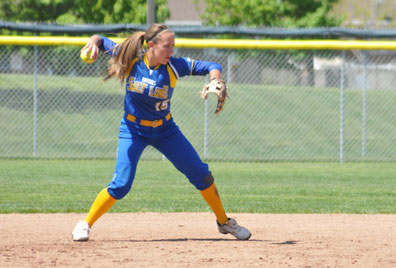 STARKVILLE, Miss. – Forty-eight student athletes from 29 different institutions have been named to one of three 2012 NFCA NJCAA Division I All-American teams, the Association announced on Wednesday.

The first of three first-teamers this season for Chattanooga was pitcher Ashley Czechner. Czechner posted the second lowest ERA in the nation at 0.66 and the most strikeouts with 370.

The other two honorees for the Tigers were infielder Lacye Walker and outfielder Shelby Johnson. Walker hit .450 with 69 RBIs and the most doubles in the nation at 29, while Johnson was second in the country in stolen bases with 83 and also had 36 RBIs.

Pitcher MaCauley Flint, infielder Maddy Woodard and outfielder Malia Campos were all named to the first team from Salt Lake. Flint went 27-2 in 2012 with 214 strikeouts and a 1.64 ERA, while Woodard drove in 79 runs and scored 78 of her own. Campos batted .392 for the Bruins, scored 68 runs and swiped 42 bases.

Rounding out the battery selections were catcher Gina Mengwasser of Seminole State (OK) and a pair of now two-time All-American pitchers Marina Contreras of Pima and Heather Parker of Wallace State-Hanceville. Mengwasser had a fantastic year offensively, hitting .477 with 65 RBIs and 22 home runs. Contreras was 20-7 for Aztecs in the circle with 208 strikeouts, while Parker fanned 271 batters and posted a 1.63 ERA.

The four other infielders were Thomasina Garza of Blinn, Olive Naotala of Howard, Daleigh Fossler of Iowa Western and Debra Lovelle of Midland. Garza batted .410 for the Buccaneers this season with 45 RBIs and 10 home runs, while Naotala earned her second first team nod by leading the nation in RBIs with 89 and home runs in 32. Fossler had an outstanding season for the Reivers with a .390 average and a nation-high 29 doubles, while Lovelle had the second–most home runs in the country at 26 and the fourth highest average at .522.

The last three honorees for 2012 were outfielders Mya Anderson of Chipola, Jessica Neely of Crowder and designated player Nicole Atkinson of North Idaho. Anderson hit .389 on the year with 60 RBIs and 25 stolen bases, while Neely turned in a .406 clip with 62 runs and 33 extra base hits. Atkinson batted .360 for the Cardinals, scored 30 runs and drove in an additional 38.

To view all 2012 NFCA NJCAA Division I All-Americans, click here.