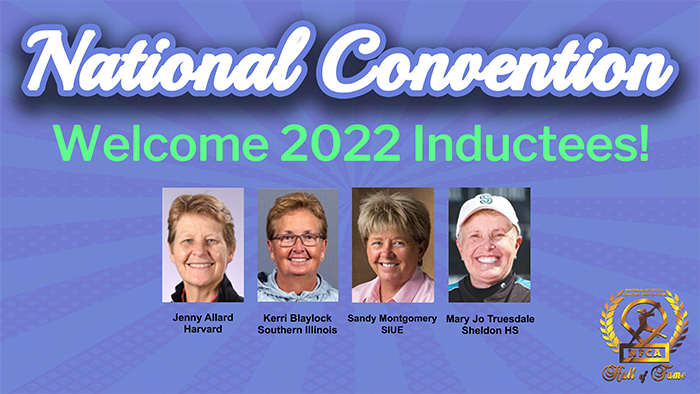 The quartet, which will bring the Hall’s total to 92 members, will be inducted on Friday, Dec. 9, 2022 in San Antonio, Texas.

Allard, who is entering her 27th season at Harvard, began her career as an assistant at Iowa, under NFCA Hall of Famer Gayle Blevins. After two years, she was named the fourth head coach in Harvard softball history and made an immediate impact, leading the 1995 squad to a 10-win improvement over the year before. In her fourth year at the helm, Allard guided the Crimson to its first 30-win season, Ivy League title and NCAA appearance. Over the course of her first 10 years, she guided Harvard to three Ivy championships (1998, 2000, 2001), to a pair of NCAA tournaments (1998, 2000) and won more games (244) than the Crimson had in its first 14 seasons of existence (203).

Allard's next 10 seasons featured more success as Harvard compiled eight .500-or-better campaigns, won three more Ivy League titles and made a trio of NCAA appearances, including a run to the regional final in 2012. In the last five full seasons, meanwhile, Allard has guided the Crimson to five winning seasons, two Ivy titles and a pair of NCAA tournament berths.

Blaylock, who enters her 23rd season at the helm of the Salukis, is the all-time winningest coach in both Southern Illinois softball and Saluki Athletics history. During her tenure, SIU has advanced to the NCAA postseason eight times, which includes being the only program in conference history to make five-straight trips from 2003-07. Southern won the 2021 Missouri Valley Conference Tournament title after it defeated Northern Iowa, 2-0 in the MVC Championship game to earn SIU’s third appearance to an NCAA Regional in the last five seasons.

Blaylock’s Salukis have posted 18 30-win seasons, including four 40-win seasons and a program-best 47 wins in 2005. SIU has compiled a 745-407-1 record under Blaylock and continues to reach new heights. One of the winningest active Division I coaches in softball today, Blaylock has guided SIU to national prominence throughout her distinguished career. The 2003 team earned SIU’s first-ever NFCA/USA Today Top-25 ranking, and the following season Southern opened and finished the 2004 season ranked in the NFCA Top-25 Coaches poll. All told, SIU has won six conference titles and made nine NCAA Tournament appearances with Blaylock on the staff.

Montgomery enjoyed an illustrious 30-year career at the helm of SIUE softball. The longest-tenured Cougars head coach and one of the most successful, Montgomery retired in 2018 with a 1,051-540-2 record. She led SIUE to a 2007 NCAA Division II national title, 12 NCAA Tournament appearances, six conference championships and 10 40-plus win seasons. During her career, she coached 11 All-Americans and 79 All-Conference selections.

The 2006 squad posted a school-record 52 wins and one year later the Cougars captured the 2007 national title and would later be inducted into the SIUE Athletics Hall of Fame. After the 2008 season, Montgomery shepherded the program through the transition from Division II to Division I. The Cougars won 40 games in their first season of Division I competition (2009) and won the Ohio Valley Conference in 2014, earning an automatic bid to the NCAA Tournament.

She was inducted into the SIUE Athletics Hall of Fame as a player after setting many of the school records for pitching. While coaching all of the players who would go on to break her records, she continues to hold the record for the lowest earned run average in a career (0.85) and shutouts (42).

A legendary pillar of high school softball, Truesdale has spent over 45 years as a head coach in the state of California, the last 25 at the helm of Sheldon High School (Sacramento, Calif.) A 2020 National Federation of State High School Associations' (NFHS) national coach of the year, Truesdale has coached in over 1,000 games with her teams generating 774 wins and numerous league and section titles. The only head coach in program history, Truesdale has built a long-standing tradition at Sheldon, starting the program in 1997 after a successful career at Elk Grove (Calif.) High School.

Not only has Truesdale grown the program from the ground up on the field, but off the field as well through community service at clinics in the communities of Rancho Murietta and Elk Grove as well as Chicks in Crisis, a non-profit in the Greater Sacramento area that supports pregnant teens and young women in crisis. The Huskies adopt families at Christmas time to provide gifts for families in need.

For more information on the NFCA Hall of Fame and how to nominate click HERE.