2022 NFCA Board of Directors announced 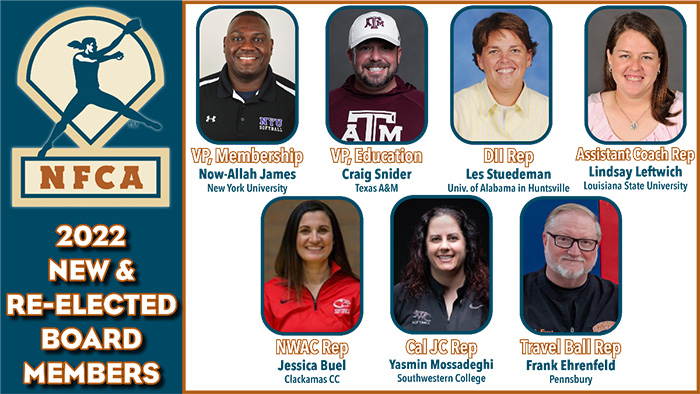 LOUISVILLE, Ky. – The NFCA welcomes seven members to the Association’s Board of Directors, who will officially begin their three-year tenures January 1, 2022. Board members are elected by the membership.

Five of the seven are serving for the first time on the board. Texas A&M assistant coach Craig Snider joins the Executive Board as the Vice President for Education, while University of Alabama in Huntsville’s Les Stuedeman (NCAA DII), Southwestern College’s Yasmin Mossadeghi (Cal JC), Clackamas CC’s Jessica Buel (NWAC) and Pennsbury’s Frank Ehrenfeld (Travel Ball) are representatives of their respective groups. Vice President for Membership Now-Allah James and Assistant Coach Representative Lindsay Leftwich were re-elected to second terms. James and Leftwich were eligible to run again after each took over in the middle of the last term.

Now-Allah James, who served on the board in 2021, has been at the helm of the New York University softball team since its debut as a varsity program in 2014-15. Over his first six seasons, James’ teams have posted a 101-96 overall record (NYU did not compete in 2021). He steered the Violets to the ECAC Division III Metro Championship in 2016, which was also the same season NYU earned its first University Athletic Association (UAA) victory. Under his guidance, 17 players have garnered UAA honors, while four have taken home NFCA All-Region accolades.

Craig Snider, a 23-year coaching veteran, enters his third season as an assistant coach at Texas A&M, serving as the program’s hitting coach and recruiting coordinator. Under his tutelage, Snider has been pivotal in the Aggie offense, which hit 70 home runs in 2021 and saw Haley Lee set the single-season record with 25 home runs and a .955 slugging percentage. Prior to Texas A&M, Snider served eight years in the Florida State dugout. He was part of the 2018 national championship squad and a year later, Snider’s teachings led to a Seminole offense setting records for home runs, batting average and RBI.

Jessica Buel (Head Coach, Clackamas Community College) – NWAC Representative
Jessica Buel has guided Clackamas CC to 13 consecutive postseason appearances (NWAC did not have a postseason in 2020 and 2021 seasons), which includes a 2012 NWAC Championship and runner-up finishes in 2007 and 2014. Over 15 seasons at the helm, Buel has steered the Cougars to a 421 victories, which includes a program-record 40 wins in 2007 and seven more seasons of 30-plus victories. Additionally, Buel was named the 2010 Southern Region Coach of the Year, 2012 NWAC Coach of the Year and the NFCA NWAC Coach of the Year in 2010.

Active in fastpitch for over 20 year, Frank Ehrenfeld has been with the Pennsbury Gems organization since 2001. During that time, he has served as coach, Director of Instruction, Director of Pennsbury Games and his current position, Director of Recruiting. In his current role, Ehrenfeld is the Gems’ representative at NFCA Camps and annual NFCA Coaches College offerings and associated conventions, while supporting the recruiting efforts for the student-athletes. Serving as Director of the Pennsbury Games (2012-18), he was the Vice Commissioner of Softball for the Pennsbury Athletic Association and was responsible for an entire recreation league of over 200 players as well as the year-round activities, development and management of all 10 Gems teams. Outside of softball, Ehrenfeld has been the Laboratory Director for international Asbestos Testing Laboratories (iATL) since 1992.

Entering her 13th season at the helm of Southwestern College softball, Yasmin Mossadeghi has played an integral part in turning the Jaguars into one of the most competitive and successful programs in California. Consistently ranked in the top 20 in Southern California, SWC has reached the state playoffs five times, including the last four seasons. A PCAC Coach of the Year, Mossadeghi has tutored one NFCA All-American, 17 NFCA All-America Scholar Athletes, two all-state and three all-So Callperformers. Additionally, her student-athletes have earned 36 PCAC All-Conference honors, 14 on the first team, one PCAC Most Valuable Player, one Most Valuable Pitcher and two Southwestern College Female Academic Athletes of the Year.

NFCA Hall of Famer (2014) Les Stuedeman has been at the helm of UAH softball since the start of the program in 1995. Over her tenure, the Chargers have posted a 1,141-385-1 record and have never suffered a losing season. UAH posted a school-record 62 wins in 1999 and has registered six 50-win campaigns and 14 more with 40-plus victories. Stuedeman has guided her teams to 22 NCAA Tournaments, including a current stretch of 18 straight, four South Region titles and two national runner-up finishes in 2009 and 2011. The Chargers have won eight Gulf South championships and Stuedeman has earned 10 GSC Coach of the Year honors.

Lindsay Leftwich embarks on her 11th season as an assistant coach at LSU. Involved in all aspects of the program, the former Northwestern State standout has been with Beth Torina for every step of her 12-year head coaching career, which includes LSU's run to the 2012, 2015, 2016 and 2017 Women's College World Series. Before LSU, Leftwich spent four seasons as Torina's top assistant at Florida International. The Golden Panthers collected 14 All-Sun Belt selections sparked by a sweep of the league's 2010 postseason awards where Kasey Barrett picked up the SBC's Pitcher of the Year, Ashley McClain notched SBC Player of the Year and Brie Rojas secured SBC Freshman of the Year.