Attendees #GetOnBoard at the 2019 NFCA Convention 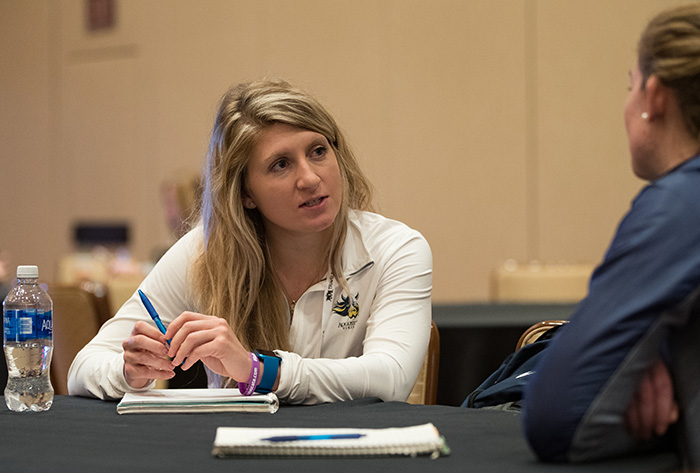 Patton kept the attendees engaged during his hour-long presentation. His high-energy and positivity was absorbed by his audience as he put them through several interactive and captivating exercises, including bringing a group of coaches up on stage for an exercise in confidence, self-awareness and body language.

Wednesday featured the previously mentioned “First Pitch” Opening Welcome, along with the Rookie Orientation for first-time attendees and several committee meetings. The evening was capped off with an evening of socializing at the NFCA Opening Reception.

Prior to the official opening, NFCC 401 and 403 classes concluded with coaches completing their course work to become Four-Star Master Coaches. Those were followed by a pair of three-hour Pre-Convention seminars. Celia Slater of True North Sports touched on building trust, managing conflict and investing in your growth, while a quartet of well-known pitching coaches – Trisha Ford (Arizona State), Michelle Gascoigne (Northwestern), Kyla Holas (More Than a Game) and Kirk Walker (UCLA) - discussed individual pitch development.

Be sure to check out the sold-out Exhibit Show, which opens its doors to members at 11:00 a.m. and runs through 6:00 p.m. and will feature education for the first time. In conjunction with the Exhibit Hall, the digital silent auction is back. The highly-anticipated event in the Exhibit Hall allows you to bid on your favorite items from the comfort of your phone by stopping by each booth. Find your favorite companies or Convention promotion, scan the QR code and make a bid.

to view all of the items available and register to bid.

You MUST visit the company/booth of the item you wish to bid on and scan the QR code in order to begin the bidding war. Helpful hint: download a QR code reader on your phone to participate