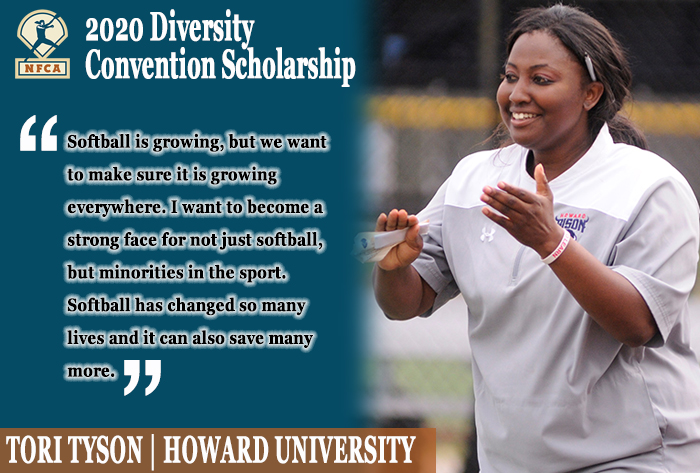 LOUISVILLE, Ky. — The National Fastpitch Coaches Association is pleased to announce Howard University head coach Tori Tyson as the recipient of the Association’s 2020 Diversity Convention Scholarship. Tyson is being recognized for her commitment to working with minorities and growing the game of fastpitch in her community.

In 2020, Tyson will receive a Virtual Convention registration, presented by Traveling Teams

. Additionally, she will receive a free 2021 NFCA Convention registration, travel reimbursement, and up to four nights paid at the Convention host hotel in Las Vegas.

Hired prior to the 2019 season, Tyson revitalized the program and led the Bison to the Mid-Eastern Athletic Conference (MEAC) Tournament for the first time since 2015 and their first tournament victory since 2011. Additionally, she steered Howard to 19 victories, the most since 2012.

Heavily involved in the Washington D.C. community, Tyson runs camps through the Washington Nationals youth academy and satellite camps. At a cost of no more than $20, her camps allow low-economic income families the opportunity to experience college camps at an affordable price. Knowing many minority athletes will be experiencing a college coach or a skills camp for the first time, Tyson keeps her numbers low so they can get the individual feedback needed.

“I believe representation matters,” said Tyson. “Softball is growing, but we want to make sure it is growing everywhere. The goal for our sport should be for little girls to turn on the television and see themselves. Softball has changed so many lives and it can also save many more.”

Howard’s softball program works directly with the inner-city youth and Tyson has acted as a spokesperson and ally for minority youth athletes. Beyond offering free and discounted clinics, Tyson lends her support to the community with a direct line to her. She in turn assists the young athletes when it comes to “who to play for” and “how to navigate their softball careers,” while also having a hand in placing minority athletes at specific universities.

“I have open practices and events so they can see, learn and believe,” Tyson said.

Tyson believes cost and exposure are the real reasons why there is a lower participation of minorities in softball as there is little to no guidance, and often no resources. She would like to see more platforms where used equipment is recycled through inner cities. Tyson feels access to the best clinics and camps should be affordable and or extremely discounted.

“Giving a little girl her first glove and or bat can change her life forever,” said Tyson.