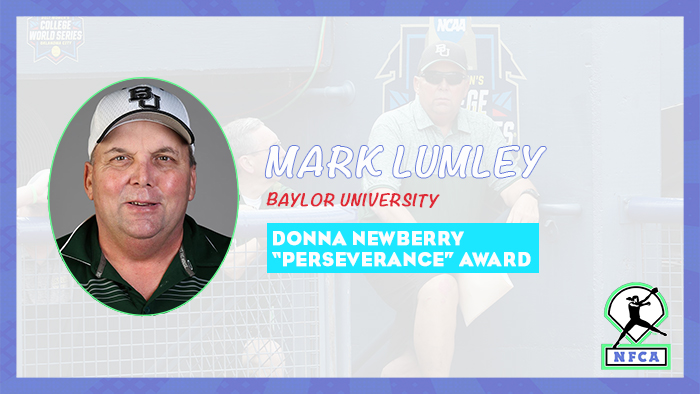 LOUISVILLE, Ky. — The NFCA is pleased to announce that longtime Baylor University associate head coach Mark Lumley has been posthumously chosen as the 2021 recipient of the Association’s Donna Newberry “Perseverance” Award, which recognizes an NFCA member coach who has demonstrated extraordinary strength of will and character in the fight to overcome a physical, mental, or social adversity that presented an additional challenge to the already demanding job of a coach.

Lumley, who passed away in December 2020, managed to never miss a practice, recruiting or games due to treatments over a 15-year period until 2019, when he was battling cancer for the fourth time. He always had a smile handy, and was constantly focused on others — especially his family, fellow coaches and the student-athletes he served — when no one would fault him for taking a little time for himself.

“Mark showed us how to live,” longtime friend and Baylor head coach Glenn Moore said in nominating Lumley for the honor. “He was a great ambassador for Baylor University and had an unwavering faith.”

He said Lumley was at his best when people needed something.

“He simply loved people,” Moore explained. “Mark did more for the less fortunate than anyone I’ve known. Mark made many mission trips with Baylor Softball internationally and domestically. He would do without for others to have what they need.”

NFCA Hall of Famer Mike Candrea, the recently-retired legendary head coach at the University of Arizona, has called Lumley, “one of the finest human beings I have ever known.”

That selfless approach extended to the softball part of his life as well, and it showed in the Bears’ success over his 19 years with the program. Baylor continually established new career and individual offensive standards on his watch, including the 2014 Bears’ 74 home runs surging past the previous mark of 68 in 2006. The 2017 squad posted a program-best .321 team batting average, which it matched the following season.

Also under his direction, outfielder Jessie Scroggins earned NFCA All-America honors in 2018 after hitting a program-best .461 average, and Big 12 Defensive Player of the Year recognition — the first for a Baylor player — as he transitioned from coaching the infielders to the outfield. That all contributed to her being selected 15th overall by the Chicago Bandits in the National Pro Fastpitch (NPF) College Draft, where she went on to earn 2018 NPF Rookie of The Year honors.

Meanwhile, outfielder Kyla Walker set personal bests in each of her first three seasons, including a .433 average in 2018, and infielder Shelby Friudenberg capped her career as the Baylor all-time leader in homers (49) and RBI (194). Both were honored as NFCA All-Region selections.

Lumley, a 1985 University of Arizona graduate, was a high school coach until 1988, when he joined Moore’s staff at LSU and then followed him when he took the Baylor job.

“He was burdened by the needs of his athletes,” Moore said, “helping prospects we couldn’t offer find a scholarship or his relentless work with the lesser-talented athlete who would never be an impact player on the field. While Mark has received much from softball, he has given much more.”

Lumley will be recognized at the Awards Brunch on Dec. 11, the final day of the NFCA National Convention at Caesar’s Forum in Las Vegas.

ABOUT NEWBERRY
Newberry, the all-time winningest coach in the history of NCAA Division III softball when she passed away in November 2010, spent 36 seasons with Muskingum College athletics. During that time, she transitioned the Muskies from a slowpitch team to a perennial national fastpitch contender in Division III.

Newberry demonstrated her perseverance as she coached what would be her final season in the spring of 2010. While undergoing chemotherapy treatments during her third bout with breast cancer, she led the Lady Muskies to the Ohio Athletic Conference tournament for the 25th consecutive time.

In the months before her death, Muskingum dedicated its softball field in her honor, renaming it the Donna J. Newberry Softball Field. In addition, Newberry finished a book about her coaching career and experiences — "You Must Play to Win: A Coach's Journey from the Pit to the Pinnacle.”