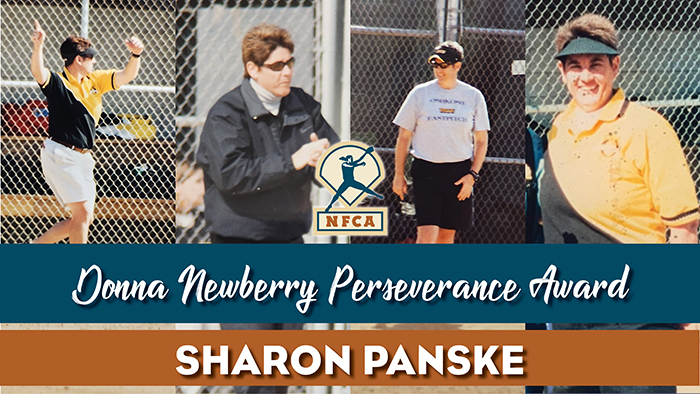 LOUISVILLE, Ky. — The NFCA is pleased to announce that longtime coach and athletic trainer Sharon Panske has been chosen as the 2022 recipient of the Association’s Donna Newberry “Perseverance” Award, which recognizes an NFCA member coach who has demonstrated extraordinary strength of will and character in the fight to overcome a physical, mental, or social adversity that presented an additional challenge to the already demanding job of a coach.

Panske, who won 298 games over 16-plus seasons as the head softball coach at the University of Wisconsin-Oshkosh and also served as an assistant athletic trainer at the school for 14 years and an assistant volleyball coach for four years, has been battling carcinosarcoma of the uterus since July 2020. She led her softball squad to a 31-9 mark in 1987, her first season, when she made the first of three NCAA appearances during her tenure.

The following season, she guided the Titans to 22 victories and a sixth-place finish at the 1988 NCAA Division III Finals in Elmhurst, Ill., after finishing first in the Wisconsin Intercollegiate Athletic Conference (WIAC) East Division standings for the second of three consecutive years. At the NCAA Finals, Wisconsin-Oshkosh lost two one-run games, falling 1-0 to eventual national runner-up Allegheny and 2-1 to perennial power The College of New Jersey, which won both the 1987 and 1989 Division III crowns. The Titans made another other trip to the NCAA tournament under Panske in 1997.

Cancer treatments are challenging enough under normal circumstances, but Panske endured much of her chemotherapy and radiation with COVID-19 restrictions and dangers in place. She also continued to work as a Board-certified athletic trainer for the Richland Hospital Therapy Center, as allowed by her doctors.

“During this period, and to this day, Sharon has stayed positive and used the opportunity to help raise money for cancer research,” NFCA Hall of Famer Sheilah Gulas wrote in support of Panske to be honored. In addition to being a longtime friend, Gulas was the coach of the Allegheny team that Panske lost to at the NCAA Finals in 1988.

“Sharon is the kind of person who is always willing to help and step in wherever needed, and continues to do this while facing one of life’s biggest challenges,” Gulas said. “Sharon coached against Donna Newberry, and I can’t think of another person who is more deserving of this honor.”

Panske has been an active member of the NFCA for more than 30 years, and first got involved in the Association during her time in coaching, including preceding Gulas on the NFCA Board of Directors as First Vice President (1988-2001), and serving on various NFCA and NCAA committees.

She has helped fundraise in support of Greater Richland Area Cancer Elimination (GRACE) and her “Panske Posse” has also worked to raise money for the Wisconsin Ovarian Cancer Alliance (WOCA).

Over the years, Panske was regularly found volunteering at the NFCA Convention, arriving early to stuff attendee packets and help in whatever way she could to make the event a success each year.

“Sharon exemplifies what this award represents, with the same strength and character so well demonstrated by Donna,” NFCA Hall of Famer Marge Willadsen said. “As Donna fought so hard to win her battle with cancer, Sharon, too, is battling hard to defeat this debilitating disease.”

“Her commitment as an athletic trainer to Richland Center High School during this stressful time is a testimony to her character, dedication and strength of purpose.”

Recently, in honor of her work with their athletes since 2004, Panske was inducted into the Richland High School Athletic Hall of Fame.

“Throughout her career, her favorite aspect has been mentoring student-athletes and teaching them the importance of hard work in reaching their life’s goals,” NFCA Hall of Famer and former NFCA Executive Director Lacy Lee Baker said. “While taking extreme measures to stay safe, she continued her treatment while working, and just retired this summer. She has demonstrated the extraordinary strength of will and character outlined in the award’s description.”

Panske will be recognized at the Awards Brunch on Dec. 10, the final day of the NFCA National Convention at the JW Marriott San Antonio Hill Country Resort & Spa in Texas.

ABOUT NEWBERRY
Newberry, the all-time winningest coach in the history of NCAA Division III softball when she passed away in November 2010, spent 36 seasons with Muskingum College athletics. During that time, she transitioned the Muskies from a slowpitch team to a perennial national fastpitch contender in Division III.

Newberry demonstrated her perseverance as she coached what would be her final season in the spring of 2010. While undergoing chemotherapy treatments during her third bout with breast cancer, she led the Lady Muskies to the Ohio Athletic Conference tournament for the 25th consecutive time.

In the months before her death, Muskingum dedicated its softball field in her honor, renaming it the Donna J. Newberry Softball Field. In addition, Newberry finished a book about her coaching career and experiences — "You Must Play to Win: A Coach's Journey from the Pit to the Pinnacle.”