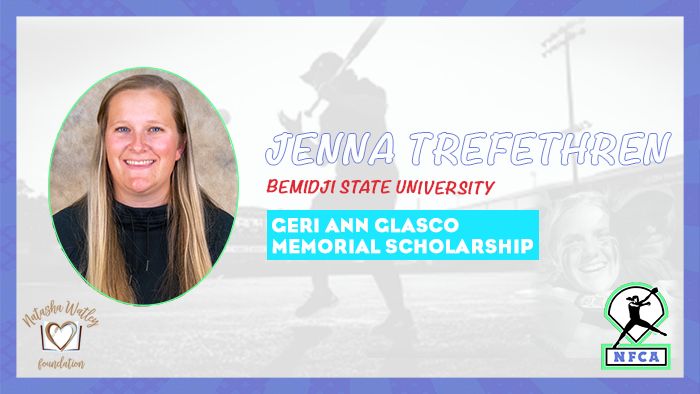 LOUISVILLE, Ky. — The NFCA is pleased to announce Bemidji State University’s Jenna Trefethren is the 2021 recipient of the Geri Ann Glasco Memorial Scholarship, created in partnership with the Natasha Watley Foundation (NWF) and the Glasco family. Trefethren will receive funding to attend the 2021 NFCA National Convention, Dec. 8-11 at Caesar’s Forum in Las Vegas.

The scholarship is awarded to a female member coach in her first five years of coaching who shows a commitment to growing the game of fastpitch in her community and has a need for financial assistance to attend the Convention. It is dedicated to remembering Glasco, an aspiring coach and elite former student-athlete, who lost her life on Jan. 24, 2019 in Lafayette, La.

“Jenna went all the way out to Massachusetts this summer to build her coaching resume,” said Bemidji State head coach Jordan Petersen. “She is committed to learning and growing the game of softball. Jenna has never attended a Convention or a Coaches Clinic, but it is clear in her choices to take on different part-time positions in order to pursue her college coaching dreams.”

In addition to her collegiate coaching experience, Trefethren has an extensive background as a youth skills instructor and coach. As the softball director at Camp Lenox (Otis, Mass.), she supervised children ages seven to 16 and was responsible for daily softball instruction. Trefethren also worked as an instructor at D-Bat Sioux Falls (S.D.), providing pitching, hitting and fielding instruction and was part of the leadership team that orchestrated youth and team camps.