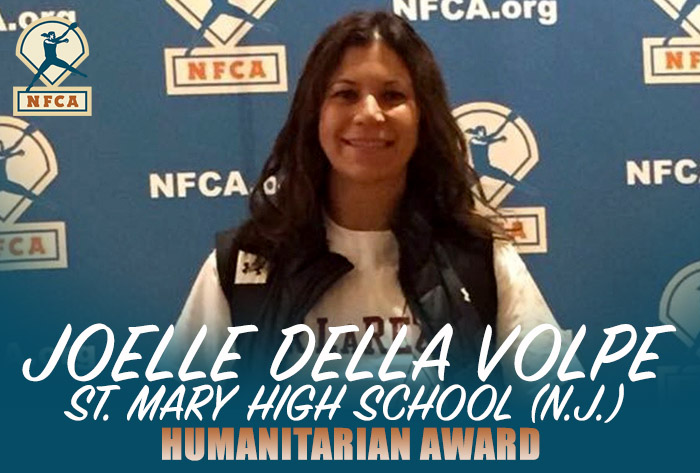 LOUISVILLE, Ky. —The National Fastpitch Coaches Association is pleased to announce that Joelle Della Volpe, head coach at St. Mary High School (N.J.), is the 2019 recipient of the Association’s Humanitarian Award. Della Volpe is being recognized for her many charitable contributions to the softball and Essex County communities.

Partnering with the NFCA, Della Volpe successfully organized and coordinated the NFCA New Jersey High School Leadoff Classic, in tribute to the late Immaculate Heart Academy head coach and 2019 NFCA Hall of Fame inductee Anthony LaRezza. Aimed at celebrating LaRezza and the positive contributions he made to his players and fans, Della Volpe fulfilled his dream of starting a tournament that would help children, specifically those with cancer. In doing so, all proceeds from the tournament went to cancer-stricken children through Tackle Kids Cancer.

In 2016, Della Volpe started #ForLaRezza Day, a social media campaign that allowed fans and players, who had worked, met, or just knew LaRezza, share special moments through images and videos. Additionally, she organized a cancer walk in his honor, taking place on April 25 each year.

“Generous and energetic, Joelle is an exceptionally-effective leader and humanitarian; she can galvanize others to action, as well as taking the lead herself,” said Blair Academy head coach Carolyn Conforti-Browse. “If there is one quality that I suspect best qualifies her for this award, it is that Joelle does not wait for someone else to do the job; when she sees a need she moves to help. She is a true leader and embodies commitment.”

Conforti-Browse first came across Della Volpe’s humanitarian work in 2012. While the head coach at Hackensack High School, Della Volpe organized a season-wide fundraiser for former Bergen County softball player Erin Kelly, who contracted a rare illness, acute transverse Mellitus, which resulted in sudden and devastating paralysis. The fundraiser raised over $100,000 for Kelly and her family.

“Joelle has always had a passion and drive to help and mentor young women in the sport of softball and in life,” said Kimberly Lynch, assistant at Western Connecticut State University. “Joelle is a dedicated wife, mother, teacher, coach and mentor. She is the first person that comes to mind when I think of someone who is always willing to help. Joelle is a true humanitarian.”

According to Conforti-Browse, Della Volpe makes life better for folks when they are facing tough struggles. She volunteers with the New Jersey FMBA, a charity fund for families of fallen firefighters, and engineers an annual sports equipment drive for donations to impoverished families in greater Essex and Passaic counties.

Della Volpe, the CEO of source4coaches, started the free mentoring program, which offers wellness clinics for new coaches to learn about mental awareness and fitness of athletes. She also assists high school students with finding and applying to colleges, the registration process for Essex County Schools of Technology and starting the process of getting into the local union.

“I have been doing this for some time now,” Della Volpe said. “I derive so much joy doing as I believe in sharing the knowledge I have. It is a small way of giving back to the community that has given me so much.”

The NFCA’s Humanitarian Award recognizes a member coach who has selflessly dedicated time toward the long-term betterment of the community and/or engaged in charitable activities in the service of others. Della Volpe will be honored in front of her peers on Dec. 7 during the NFCA Awards Brunch at the 2019 NFCA Convention, held Dec. 4-7 at Harrah’s Resort Atlantic City.