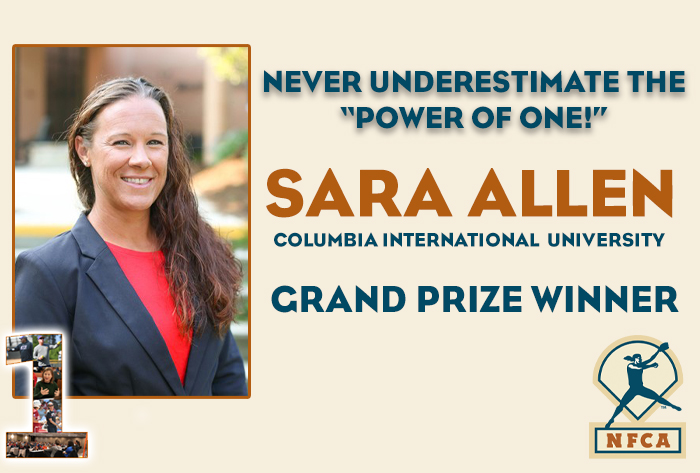 LOUISVILLE, Ky. — Columbia International University head coach Sara Allen was chosen as the grand-prize winner in the NFCA’s 2021 “Power of One” membership drive, which sought to grow the Association by asking each member to get one new person to join before the 2021 NFCA National Convention at Caesar’s Forum in Las Vegas.

Allen’s name was drawn from the received referrals during the membership drive that went from Sept. 15 to Dec. 1. As the winner, she chose two tickets to every game of the 2022 Women’s College World Series in Oklahoma City from a list of six spectacular prizes.

Each time a member referred another person to join the NFCA as a new member before the Dec. 1 deadline, they earned an entry into the contest. New in 2021, when a full membership was donated, the referring coach was entered in the “Power of ONE” drive. The gift granted another coach the opportunity to benefit from all the NFCA has to offer, and in turn, that coach entered five times into the grand-prize drawing.