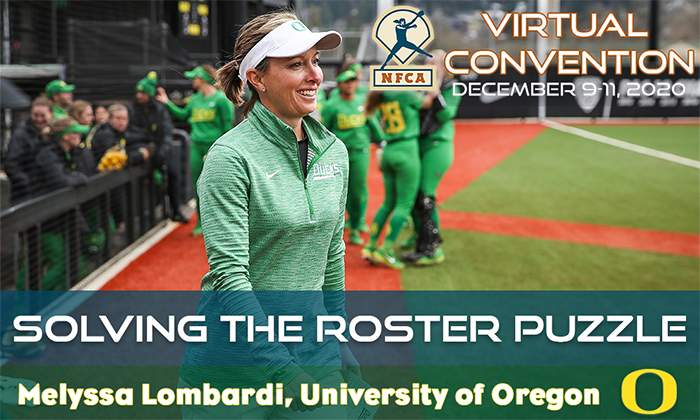 , for the NFCA Virtual Convention is $229 for members and $329 for non-members. Attendees will have access to the on-demand content for 30 days following the Convention. This means you do not have to choose between competing sessions, all the content is available for the taking!

Additionally, members can select a $20 upgrade ($249 total) for lifetime access to on-demand content. Register by December 1 to receive a Convention attendee gift courtesy of USA Softball.

NFCA Members:  Have you experienced a furlough or been laid off during the pandemic? If so, we want to help. The NFCA is committed to supporting its members through this pandemic. We understand the impact of COVID-19 is widespread and far-reaching. Please contact our membership team at events@nfca.org or (502) 409-4600 for special discounted Virtual Convention pricing.

More about the speakers:

Lindsay Leftwich embarks on her 10th season as an assistant coach at LSU. She is involved with all aspects of the program, which includes defense, hitting, recruiting, video scouting and camps. The former Northwestern State standout has been part of LSU's run to the 2012, 2015, 2016 and 2017 Women's College World Series. Under Leftwich’s guidance, LSU’s batting average improved 43 points from 2018 to 2019, while the Tigers have set several offensive records since her arrival. Before joining the LSU program, she served four years as an assistant at FIU and a graduate assistant at New Mexico.

Melyssa Lombardi enters her third season as Oregon’s head coach, following a highly-successful 21-year tenure on Oklahoma’s coaching staff under Patty Gasso, the final 11 years as the Sooners’ associate head coach. In 2020, the Ducks got off to the second-best start in program history through 24 games, going 22-2 and opening the season on a 16-game winning streak. Oregon excelled across the board, finishing as the only NCAA Division I team to rank in the nation’s top 15 in batting average, ERA and fielding percentage. The 2017 Easton / NFCA NCAA Division I Assistant Coach of the Year was part of four national titles at Oklahoma and coached the Sooner battery to a combined 20 NFCA All-America honors. Under her tutelage, OU’s pitching staff led Division I in ERA three times and posted a top-25 ERA in nine of her last 10 seasons.

founded and launched OnBase University, the first baseball-softball-specific certification program of its kind, offered for health and fitness professionals. A board-certified chiropractor, Rose, who also holds an engineering degree, helped pioneer the field of analyzing three-dimension motion-capture models of athletes. He specializes in biomechanics, strength and conditioning, manual therapy, rehabilitation and therapeutic exercise in relation to sports. Additionally, Rose is the founder of RacquetFit, co-founder of the Titleist Performance Institute (TPI), co-owner of FMS (Functional Movement Systems) and co-developer of the Selective Functional Movement Assessment (SFMA).

Nate Walker, a former collegiate baseball player at Holy Cross and Northwestern, founded Diamond Solutions in 2017. The company uses its MLB front office development experience to serve as a player development consulting firm that aims to maximize baseball and softball players’ potential, using tracking technologies and other relevant front office statistical methods. Following graduation, Walker was hired as an advanced scout for the Tampa Bay Rays in 2016, assisting the front office with statistical research projects, the Amateur Draft, trade deadline, and Minor League free agency. He served in a similar capacity for the Toronto Blue Jays during the 2017 season.

Austin Wasserman is the founder of Wasserman Strength and High Level Throwing®. He wrote the High Level Throwing® Series e-books and is a Certified Strength & Conditioning Specialist (CSCS) and Certified Personal Trainer (CPT) through the National Strength & Conditioning Association (NSCA). Wasserman, a former collegiate and independent league baseball player, works with baseball and softball players of all ages and has consulted with some of top collegiate programs in the country. Additionally, he created HighLevelThrowing.com, an educational website for baseball and softball players with information and training products for movement, arm care, injury prevention, rehabilitation, throwing development and training books.