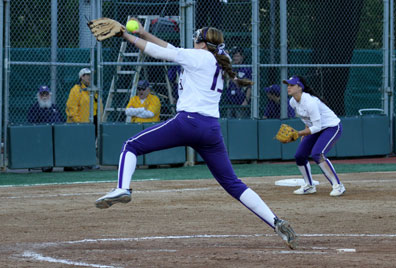 OKLAHOMA CITY, Okla. – Hitting in softball is said to be of the hardest things to do and often provides a player with more lows than highs throughout a game. That said sometimes the highs can truly make all that trouble and frustration worth the effort.

That was certainly the case for Washington’s Kimberlee Souza on Thursday during the Huskies’ WCWS opener at the ASA Hall of Fame Stadium in Oklahoma City, Okla., as the third baseman shook off an 0-for-3 effort at the dish to blast a walk-off solo home run to left, finishing UW’s 4-3 (8 inn.) comeback win over Nebraska.

Washington managed just three hits off a combination of Nebraska starter Tatum Edwards and reliever Emily Lockman (took the loss), but made them count via HR’s from both Souza (1-for-4, RBI) and designated player Kaitlin Inglesby (1-for-2, two RBIs). Inglesby picked up the victory in relief of starter Bryana Walker (3 IP, 1 ER, 2 K’s), tossing five frames of four-hit relief while allowing a single tally.

"We didn't quite expect that to be that much of a tough offensive game, but credit to Nebraska's pitching staff," Washington head coach Heather Tarr said. "I thought they threw a great game, and we fortunately found a way to come back and win that game.  It was great to see both Bryana and Kaitlin work together again today, and I can't say enough about just the clutch performance for Victoria to get on base for us to score that tying run; then Kimberlee to do what she needed to do to end the game."

The Huskers managed five hits in the contest with the lone RBI coming via sac fly off the bat of right fielder Brooke Thomason in the first inning.

The fireworks began immediately during the opening frame as each team managed to post a number on the scoreboard. The Huskers managed to do so without the benefit of a hit as third baseman Gabby Banda and catcher Taylor Edwards christened the rally through being struck by one-out pitches from Washington starter Bryana Walker. Following a wild pitch that advanced the duo up 60 feet on the base paths into scoring position, right fielder Brooke Thomas lifted a towering sacrifice fly into left center, proving plenty deep enough to plate Banda from third for a 1-0 lead.

Washington wasted no time answering in the bottom half as a lead-off walk issued by NU’s Tatum Edwards to UW right fielder Victoria Heyward was cashed in with one retired via a long two-run shot to left center from designated player Kaitlin Inglesby as the Huskies nabbed a 2-1 advantage.

Action settled down until the bottom of the third when Washington threatened against Edwards. Hayward was again the catalyst after drawing another leadoff free pass, swiping second and advancing quickly to third as the throw from Husker catcher Shawna Wright ricocheted into center. After consecutive walks, including an intentional pass to the dangerous Inglesby, loaded the bases for UW, center fielder Kylee Lahners chopped a ball to third. Nebraska’s Banda corralled the ball and fired a strike to the dish to start a key 1-2-3 (third-home-first) double play. That effort effectively neutralized the scoring threat as third baseman Kimberlee Souza lifted a harmless fly to right as the Huskies missed a golden scoring opportunity.

A leadoff base knock to left from NU’s Edwards and a walk issued to Thomason brought an end to Walker’s stint in the circle in the top of the fourth as Inglesby entered in relief. The new hurler very nearly escaped the jam unscathed following a sac bunt and a shallow fly to right. A slow roller off the bat of shortstop Alicia Armstrong to second proved a tough play for charging Washington infielder Kelli Suguro. She made the grab on the run but her throw was wide for an error, allowing Edwards to score easily from third and deadlock the contest at 2-2. That was all the Huskers would get, however, as Thomason was gunned down at the plate on the same play to end the threat.

The back-and-forth contest swung back in favor of Nebraska in the top of the fifth. With two outs and Edwards stationed at first, a single from Banda to center followed by an Inglesby wild pitch allowed Edwards to cross from third for a 3-2 advantage.

Washington managed to load the bases with just one retired in the bottom of the fifth via three walks against a combination of starting pitcher Edwards and reliever Emily Lockman. The trio never moved from their positions on the base paths, however, as the hurler registered consecutive strikeouts of Lahners and Souza to escape the jam and maintain NU’s 3-2 lead.

Down to one final chance in the bottom of the seventh to extend things, Hayward granted the Huskies life as her line drive to right bounced under the glove of Nebraska’s Thomason on a diving attempt and rolled all the way to the wall for a triple. First baseman Hooch Fagaly followed with a perfect sacrifice bunt out in front of the plate, scoring Hayward from 60 feet away and tying the count at 3-3.

The end came suddenly in the bottom of the eighth as Souza blasted the very first pitch of the inning from Lockman over the left center field wall allowing Washington to prevail in eight frames, 4-3.