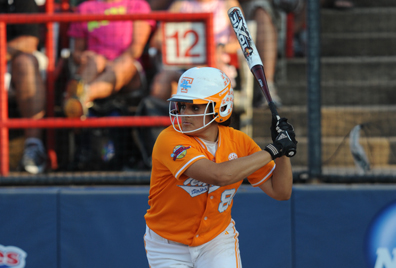 STARKVILLE, Miss. – Sophomore outfielder Raven Chavanne of Tennessee and junior pitcher Jen Mineau of Fordham have been named as the NFCA Division I Co-National Players of the Week for games played Apr. 25-May 1, 2011.

Chavanne went 6-for-7 last week in the Lady Vols three-game sweep of Arkansas with six runs, five RBI, four doubles, three walks and a stolen base. For the week, she turned in a .857 batting average, a .900 on-base percentage and a 1.429 slugging percentage.

The Thousand Oaks, Calif., native proved to be trouble for Arkansas each time she came to the plate from the leadoff spot during the series. Over the three-game set, Chavanne reached base safely in nine out of 10 plate appearances and began the series with a streak of reaching base seven straight times.

Currently, Chavanne is leading the SEC with a .473 batting average and is in the midst of a 14-game hitting streak. The fifth-ranked Lady Vols will head into their final regular-season series at No. 4 Florida this week with a 44-7 overall record and a 20-5 record in league play. Tennessee can claim the 2011 SEC regular-season title with a series win over the Gators.

Mineau was 5-0 last week and allowed no runs off of just 10 hits with only four walks and 49 strikeouts. She ended the week with a perfect 0.00 ERA, an opponent’s batting average of .093 and five shutouts.

The crown jewel of Mineau’s week came in the Ram’s second game against Saint Peter’s when she tossed the fourth perfect game of her career to bring her career total of no-hitters to seven. For the week, the Schaghticoke, N.Y., native notched three 10-plus strikeout performances and tallied a strikeout to walk ratio of 12:1.

Other Top Performances
California’s Joelene Henderson won all three games for the Bears last week and recorded 25 strikeouts as Cal swept then eighth-ranked UCLA… Morgan Melloh of Indiana allowed just two runs over 27 inning of work last week with 44 strikeouts, as the Hoosiers went 4-0… Syracuse’s Jenna Caira won all six games for the Orange last week while limiting opponents to a .090 batting average and fanning 43… Brianna Jorgensborg of Notre Dame batted .600 last week with three doubles and three home runs to help lead the 25th-ranked Irish to a 5-0 week.