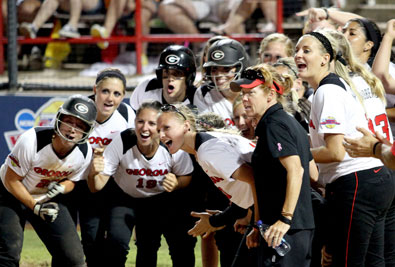 STARKVILLE, Miss. – A loss by previous No. 1 UCLA and a perfect 10-0 start to the 2011 campaign proved to be the magic formula that Georgia needed to rise to the top spot in the latest USA Today/NFCA Division I Top 25 poll that was released by the Association on Tuesday.

Staying put at sixth were the Sooners of Oklahoma (11-1), while Washington (8-0) moved up three spots to seventh. Falling five spots to No. 8 was Tennessee (9-1) who lost twice on the week , while Michigan (10-0) and Hawaii finished in ninth and 10th, respectively.

Moving into the poll for the first time in over two years this week was No. 23 Houston (9-1), who scored two wins over No. 18 LSU and a win over No. 20 Oklahoma St. The lone team to fall out of the latest edition of the rankings was No. 22 North Carolina, who was swept in a three-game set by Florida.