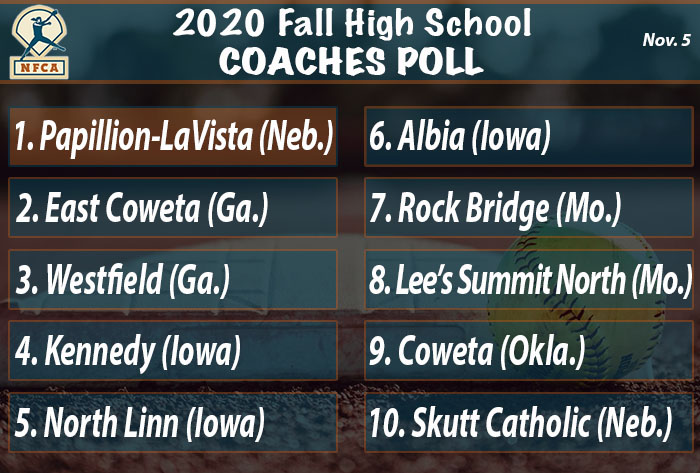 LOUISVILLE, Ky. — East Coweta stumbled for the second time this season against a team that started the year ranked sixth, but rebounded to claim a winner-take-all Class 7A title game and capture its third Georgia state championship in the last four seasons to close out the 2020 NFCA Fall High School Top 25 Coaches Poll.

The second-ranked (36-2) Indians ran into new No. 24 North Gwinnett in the double-elimination state final four, edging the Bulldogs, 3-2 last Friday before meeting again in Saturday’s championship, a 7-2 East Coweta loss, which forced a second title game, won 3-2 by the Indians.

Meanwhile, Missouri’s Lee’s Summit North (28-4) slipped a few spots in the final ranking after being edged 1-0 by unbeaten Rock Bridge (29-0) last Friday in the Class 5 state championship. The Broncos had been ranked fifth nationally since a strong showing in a 3-1 road loss to top-ranked, back-to-back Nebraska state titlist Papillion-LaVista on Sept. 26. The Bruins, by virtue of their win over Lee’s Summit North, find themselves just ahead of the team they beat in the season’s last Top 25.

Harrison (29-6) was East Coweta’s first victim in the Georgia final four at the South Commons Complex, but bounced back from that 8-0 loss to defeat Archer, 11-3, only to fall to North Gwinnett, 16-3, in its next game with a spot in the championship on the line.