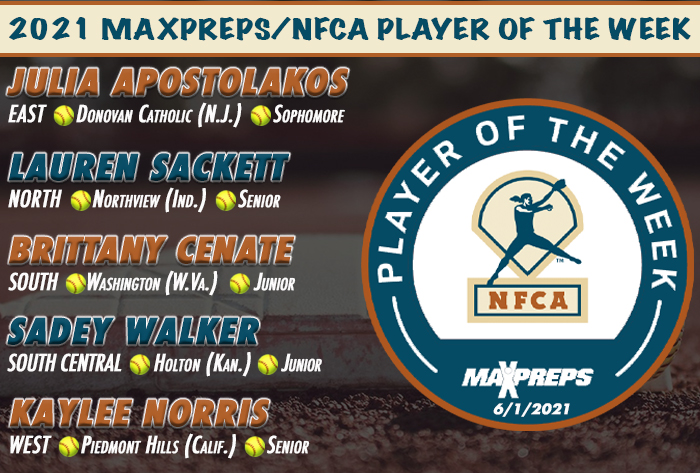 Apostolakos fueled the Griffins from the circle, going 2-0 with a shutout, three hits allowed, 12 strikeouts, no walks and no runs yielded in 11.2 innings. She fanned four and allowed two hits over 4.1 innings against Manchester Township, and pitched 1.1 innings of scoreless relief against Middletown South, before facing Manchester Township again, this time tossing a complete-game one-hitter in which she fanned seven. The sophomore also helped herself at the plate, going 4-for-9 (.444) with two runs scored, a double, homer and three RBI.

Sackett won both her starts, a pair of shutouts in which the Knights outscored their opponents 24-0. She struck out nine and walked one over three no-hit innings against Brown County, then fanned 16 and walked two in a two-hitter against Edgewood. The senior also helped contribute to the offensive onslaught, going 3-for-6 (.500) at the plate with a triple, two runs scored and two RBI.

Cenate was a force at the plate and on the bases for the Patriots, hitting .643 (9-for-14) with 11 runs scored, a double, 10 RBI and eight steals in three games. The junior’s hit total ascended as the week progressed, with two, three and four hits, respectively. She collected seven hits and scored eight runs in a pair of games against East Hardy, and had five stolen bases in her final contest of the week.

Walker led the Wildcats to two wins with her pitching prowess out of the bullpen. The junior recorded victories against Winfield and Clay Center, combining to allow just one hit and striking out 10 in those two games. And she did all she could to keep Holton in a game it ultimately lost 3-2 to Andale/Garden Plain, fanning 10 and walking one in five innings of no-hit relief. Walker also helped her cause at the plate, hitting .667 (6-for-9) with four runs, a double and four RBI for three games.

Norris was perfect at the plate for the Pirates, going 9-for-9 in a split of two games. The senior had five hits, including four doubles, five runs scored, and five RBI in a lopsided 15-5 triumph over Willow Glen, then added four more hits, including another double, scored a run and drove in two in a 10-8 loss to Live Oak. For the week, she totaled five runs, five doubles, and seven RBI, walked once and didn’t strike out in 10 plate appearances.

each week during the spring campaign with a player from each of the five separate high school regions being selected. In the fall season, one representative is chosen from the participating regions.