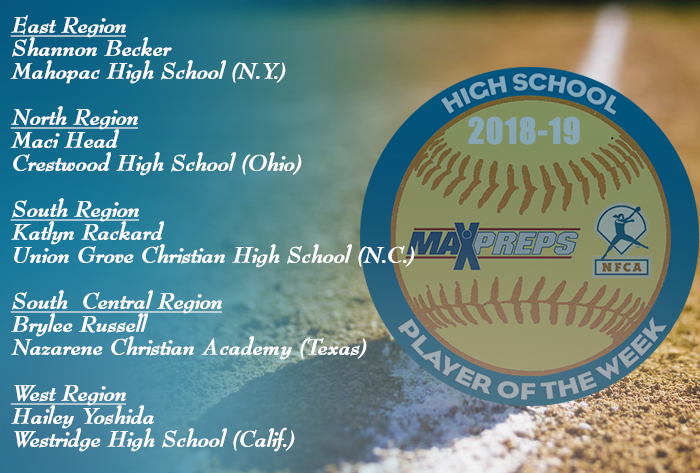 East Region
Becker fanned 17 or more hitters in all four games she pitched last week for the Indians. The sophomore struck out all 21 Carmel batters in a perfect game, and had one-hitters against Walter Panas (20 strikeouts) and Yorktown (17 strikeouts), plus a five-hitter (17 strikeouts) versus Suffern. For her week in the circle, Becker allowed just seven hits and one run over 28 innings, while walking two and fanning 75. She also helped herself at the plate, going 5-for-10 (.500) with two runs scored.

North Region
Head batted 1.000 (5-for-5) with five runs scored, a double, three homers and eight RBI in two games last week for the Red Devils. The sophomore third baseman had all three homers and seven RBI in a 10-0 victory over Ravenna last Wednesday.

South Region
Rackard was 8-for-9 (.889) in three games for the Patriots. The sophomore shortstop and pitcher racked up 11 runs, a double, triple, two home runs and eight RBI. She had two, three-hit games against Wilson Christian Academy on Saturday and a two-hit game this previous day against New Life Christian Academy.

South Central Region
Russell hit 1.000 (6-for-6) with five runs, three doubles, a triple and a homer in a pair of lopsided wins on back-to-back days for the Lions. The senior infielder had three runs, three doubles and a triple last Monday against Parkview Christian, then two more hits (including a homer) versus Newman International Academy.

West
Yoshida tossed a no-hitter against Vasquez and a one-hitter versus Whitney and allowed just a single unearned run in 13.2 innings of work for the Tigers. The freshman had a 6.2-to-1 strikeout-to-walk ratio, limiting her opposition to five free passes, while fanning 31 of the 50 batters she faced.