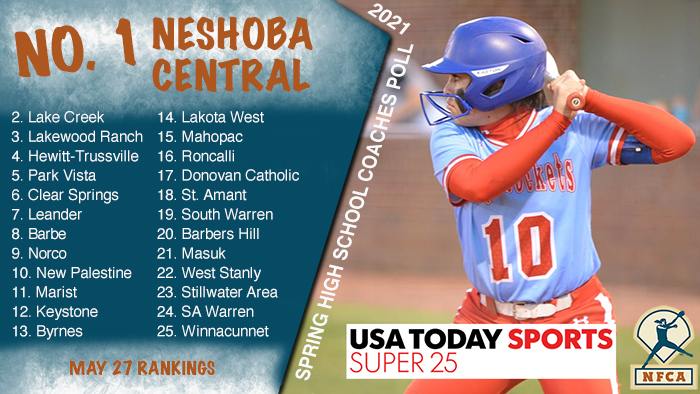 Lake Creek (38-1) remained second in the rankings despite Wednesday’s 3-0 loss to No. 20 Barbers Hill (39-2) in the first game of a best-of-three Texas 5A playoff series. The two teams could play as many as two games today to determine which squad moves forward and which one is done for the season.

Meanwhile, Lakewood Ranch (30-2) moved up to No. 3 this week after capping its season with an impressive 14-4, run-rule victory over No. 5 Park Vista for its first Florida state Class 7A championship, just ahead of Hewitt-Trussville (49-3-1) which dropped a game to Fairhope en route to a second-straight Alabama state Class 7A crown.

Mahopac (13-1) got a 12-strikeout, three-double, five-RBI performance from Notre Dame commit Shannon Becker in a 10-0 victory over Somers on Wednesday to finally get off the radar and into the rankings at No. 15, while top-seeded Donovan Catholic (18-1), which will play in its third straight Shore Conference Tournament final on Saturday, enters the poll at No. 17.

No. 22 West Stanly (20-0) wrapped a perfect season with a state Class 2A crown to slot in just ahead of fellow newcomer Stillwater Area (19-1), which has a Section 4AAAA quarterfinal looming Tuesday.