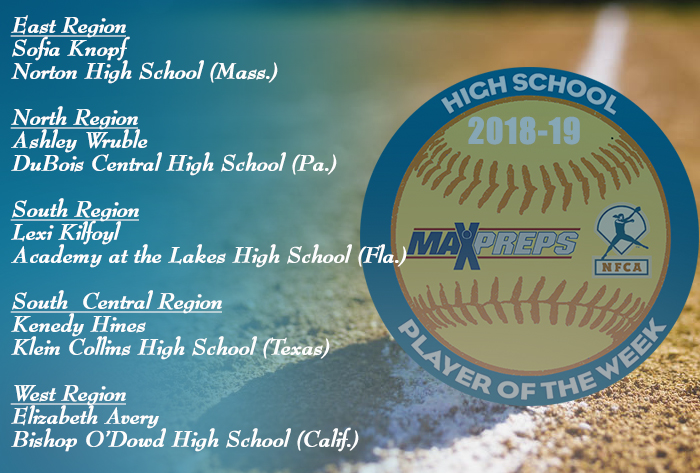 East Region
Knopf twice struck out 13 or more batters in three victories for the Lancers. The junior fanned 13 in a five-inning no-hitter against Dover-Sherborn last Tuesday, then followed that up with 14 strikeouts in a six-inning, two-hitter versus Ashland on Wednesday. She struck out another seven in Thursday’s two-hit shutout of Bellingham, to give her 34 for the week, with just three walks, four hits and one run allowed.

North Region
Wruble was a perfect 8-for-8 (1.000) this past week for the Cardinals, with seven runs scored, two doubles, two homers, and eight RBI. The senior had five hits, including two doubles and a homer, plus five RBI in a lopsided victory over Otto-Eldred on Friday, and was 3-for-3 with three runs, three RBI and two steals against Coudersport last Tuesday.

South Region
Kilfoyl struck out a total of 19 while tossing a no-hitter and an one-hitter in back-to-back shutouts last week for the Wildcats. The senior pitched a five-inning one-hitter with nine strikeouts against Peniel Baptist Academy last Tuesday, then fanned 10 in a five-inning no-hitter versus Mount Dora Christian Academy. She also helped herself at the plate, going 4-for-8 (.500) with a double, triple, homer and six RBI.

South Central Region
Hines allowed just one earned run over 14 innings in the circle last week. The senior struck out 20 and allowed just seven hits and one walk in her two contests. She fanned 11 in an one-hit shutout of Wylie on Thursday, then scattered six hits and struck out nine in a second matchup with Wylie the following day.

West
Avery hit .714 (10-for-14) with six runs scored, four doubles, two homers, and seven RBI, while also excelling in the circle. The senior was 3-for-4 with a grand slam and four RBI last Wednesday against Rancho Cotate, when she fanned nine in the circle. Avery had multiple hits in all four games, and struck out 11 or more in three of her victories. For the week, she fanned 50 and allowed just four earned runs, and seven walks over 28 innings.