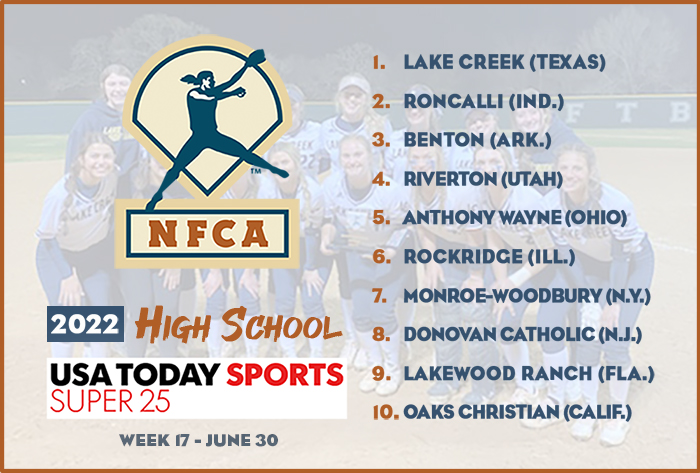 LOUISVILLE, Ky. — Unbeaten Texas state 5A titlist Lake Creek is No. 1 in the final USA TODAY Sports/NFCA High School Super 25 of the 2022 season.

In all, unbeaten teams comprise half of the top 10 teams, including five of the first seven. The (41-0) Lions lead the way with their 15th week in the top spot, followed by Indiana titlist Roncalli (33-0) at No. 2 and Arkansas state champ Benton (32-0) in the third spot.

No. 6 Rockridge (35-0) and seventh-ranked Monroe-Woodbury (26-0) are the other two teams in the poll who did not lose a game this season. Rockridge is the first Illinois team to have back-to-back unbeaten seasons, while the Crusaders rode senior pitcher Brianna Roberts to New York’s Class AA title.

Utah’s Riverton (28-1) and Ohio’s Anthony Wayne (30-1) had just one blemish on their record in the fourth and fifth positions, respectively, while No. 8 Donovan Catholic (30-1) suffered its lone loss to fellow state titlist Haddon Heights in New Jersey’s Tournament of Champions. The Griffins had just won a third-straight state Non-Public A crown and were riding a 48-game win streak at the time.

Ninth-ranked Lakewood Ranch (30-2) avenged two early losses to Lake Brantley with a 8-2 victory over the Patriots in the Florida state Class 7A championship, and No. 10 Oaks Christian (34-1) closed the year with three California playoff triumphs after a mid-May loss to Los Alamitos snapped the Lions’ 31-game win streak.