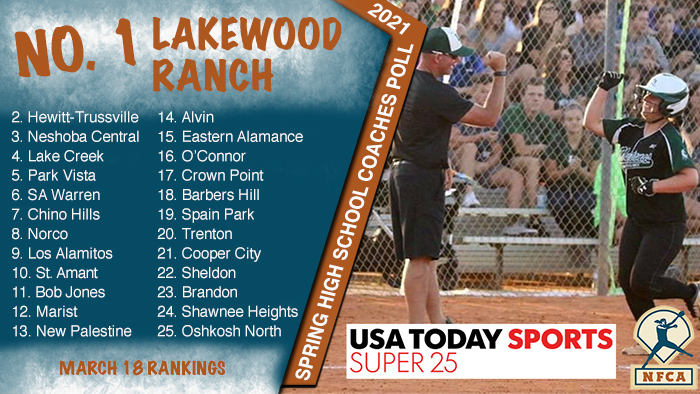 LOUISVILLE, Ky. — Lakewood Ranch had a rare stumble this week, but added three wins to remain No. 1 in the USA TODAY Sports/NFCA High School Super 25 poll.

The (11-1) Mustangs galloped past Parrish Community last Thursday, and both Gainesville and Trinity Christian on Saturday — by a 43-10 margin over those three games — but was edged by Doral Academy, 2-1, last Friday to snap a 17-game win streak. It was Lakewood Ranch’s first loss since falling 3-0 to Winter Park in the 2019 Florida state Class 8A title game.

Alabama’s Hewitt-Trussville (16-1-1) added three wins and a tie to remain solidly entrenched in the No. 2 spot. The Huskies won last Thursday’s showdown with No. 19 Spain Park, 2-1, and defeated both John Carroll and Oxford, while tying 11-11 with Mortimer Jordan, which it had beat soundly in their previous two meetings.

Spain Park (16-4) has won five straight after the ranked loss, in which Annabella Widra homered and struck out 13 Hewitt-Trussville batters in a complete-game five-hitter.

Perennial Mississippi and national power Neshoba Central (1-0) got its season rolling this past Friday with a 6-5 eight-inning victory over North Panola and plays another road contest on Tuesday at Morton. The Rockets had won seven straight state championships before COVID-19 halted the season a year ago.

Meanwhile, unbeaten Lake Creek (17-0) leaped into the poll this week at No. 4, taking top Texas-team status from San Antonio Warren, which kept winning, but dropped one spot to sixth, behind Florida’s Park Vista in fifth. And with competition about to get going in California for Chino Hills, Norco and Los Alamitos, those three schools stayed bunched together, but shuffled their order this week.