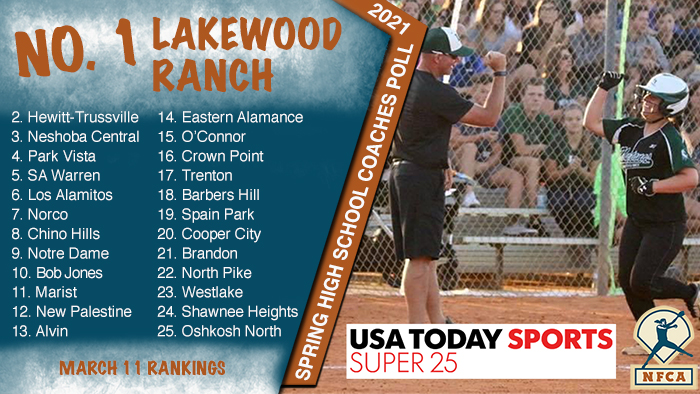 LOUISVILLE, Ky. — Lakewood Ranch added another win to its unblemished resume to remain No. 1 in the USA TODAY Sports/NFCA High School Super 25 poll.

The (8-0) Mustangs galloped past Charlotte, 12-0, on Tuesday, with Olivia Laney tossing four scoreless innings and Ella Coiner driving in three runs with two hits, including a homer. Coiner also struck out two in an inning of relief, while Jillian Herbst added three hits, and Faith Ross and Olivia Ryan had two hits and two RBI apiece.

Lakewood Ranch has now outscored its opponents 86-5 in 2021, and are riding a 16-game win streak since falling 3-0 to Winter Park in the 2019 Florida state Class 8A title game. Lakewood Ranch was 8-0 when COVID-19 halted its 2020 season as the No. 2-ranked team nationally, and is 46-1 over the last three years. The Mustangs have four games in the next three days: Parrish Community tonight, then Doral Academy on Friday, and Trinity Christian and Gainesville back-to-back on Saturday.

Elsewhere, a showdown between top Texas squads failed to impress, with Barbers Hill rolling past Alvin, 10-0, last Thursday. The (13-2) Eagles are in the midst of a nine-game win streak, and gained four places in the rankings after a 7-0 week.

Another Texas school, San Antonio Warren (11-0) won three games in the last week, behind a big effort from pitchers Annika Litterio and Haley Vinton. The duo teamed for a no-hitter against Taft last Friday, then Litterio tossed a solo no-hitter in an 8-0 victory over O’Connor on Monday, and Vinton had a one-hit shutout in a 11-0 triumph over Jay on Wednesday.