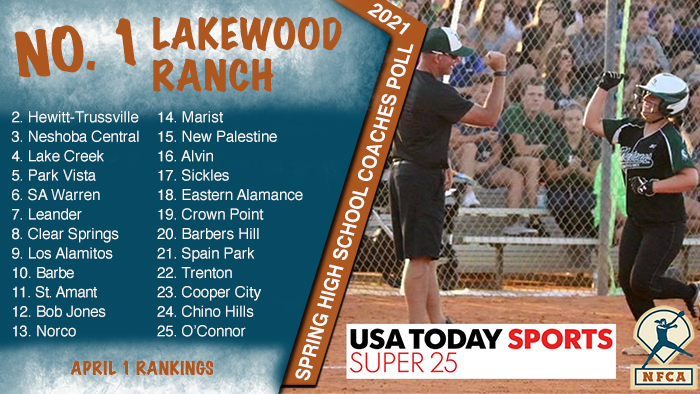 The (14-1) Mustangs are back in action today with a home doubleheader against Braden River, following wins over Hardee (16-0 last Thursday), Venice (11-3 on Monday) and Canterbury (6-3 on Tuesday).

The next five teams in the poll also continued to win and stayed put. No. 2 Hewitt-Trussville (23-1-1) and fourth-ranked Lake Creek (24-0) added five victories apiece, while No. 3 Neshoba Central (4-0) and sixth-ranked San Antonio Warren (15-0) each won once. No. 5 Park Vista (12-0) was idle last week, but resumes play tonight with a home game against Dwyer.

Leander (25-0) continued to roll through its schedule in Texas, and is the new No. 7 team in the poll. Chino Hills (1-2), which had been the seventh-ranked team, fell all the way to 24th after dropping its first two games — one of which was a 5-4 loss to then-No. 12 Norco.

Meanwhile, Barbe (23-1) joined fellow Louisiana school St. Amant (21-2) in the rankings this week. The newcomer Buccaneers, who have won 20 straight, jumped in ahead of the Gators at 10th, based on St. Amant’s 4-2 extra-inning loss to West Monroe, a team Barbe beat 9-4 on March 19.