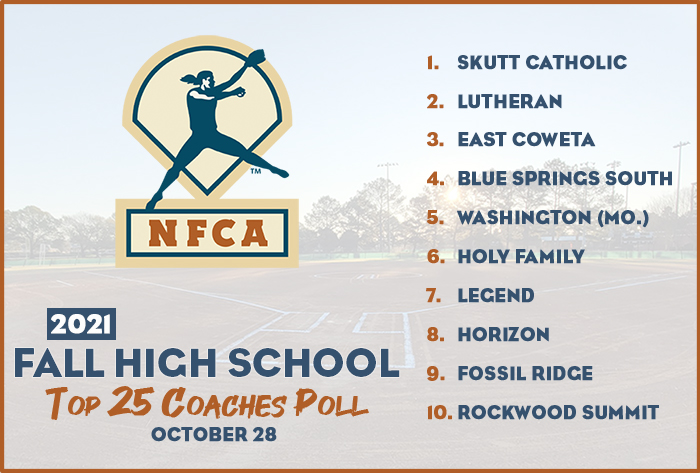 LOUISVILLE, Ky. — Lutheran claimed its first Colorado state 3A title in just its second season of existence to wrap a perfect season and lock in the No. 2 spot behind fellow unbeaten Skutt Catholic in the NFCA Fall High School Top 25 Coaches Poll.

The (29-0) Lions, who will not graduate anyone when they move to 4A next season, feasted on their competition this year, outscoring opponents 388-23, including 52-3 over their final four games. Lutheran actually fell behind 2-0 in the first inning of the 3A final against University before scoring 13 unanswered runs.

Top-ranked Skutt Catholic (33-0) wrapped up the first perfect season in the 25-year history of Nebraska’s Class B two weeks ago, in a state final that lasted just three innings due to the run rule.

Missouri’s Blue Springs South (29-4), moved up two places this week to No. 4 and continues its state Class 5 play against Francis Howell Central following last week’s 6-2 playoff win over Nixa, while fifth-ranked Washington (30-5) also advanced in Missouri’s state tournament, and has a Class 4 game against Platte County up next.

No. 6 Holy Family (25-4) captured its third Colorado state title in the last four years, defeating D’Evelyn, 10-4, in last Saturday’s final to again move up the rankings. The Tigers are now 95-10 over a four-season stretch.

Legend (25-4) is the lone newcomer to the poll this week at No. 7, after claiming its third Colorado Class 5A crown in the last five seasons. The Titans beat then-No. 4 Horizon in the state semis, and rolled past Columbine, 8-0, in the championship.