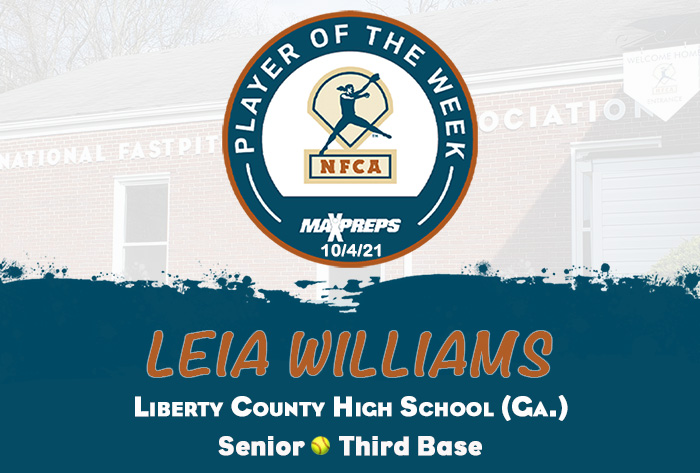 LOUISVILLE, Ky. –  Leia Williams of Liberty County High School (Hinesville, Ga.) was named MaxPreps/NFCA High School Player of the Week. Williams is being recognized for her outstanding performance during the week of Sept. 27-Oct. 3.

Williams had a monstrous week at the dish, hitting .889 (8-for-9) with four doubles, three home runs, 14 RBI and a 2.777 slugging percentage. She also scored nine runs and reached base at a .909 clip. In her first game of the week against Beach, Williams (4-for-4) tripled three times, homered, drove in six and scored four times. The senior third baseman followed that performance by going 4-for-4 against Savannah with two more long balls, a triple, eight RBI and three runs scored. Against Windsor Forest ,Williams walked in her only two plate appearances and scored twice.

every Monday during the fall season. During the spring campaign, a player from each of five separate high school regions is selected.