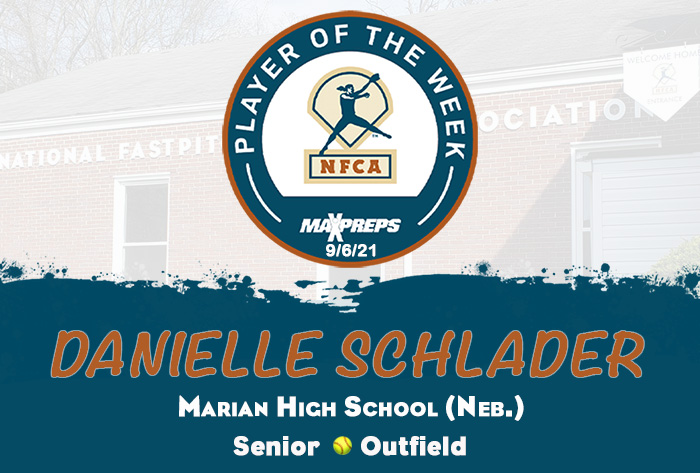 LOUISVILLE, Ky. –  Danielle Schlader of Marian High School (Omaha, Neb.) was named MaxPreps/NFCA High School Player of the Week. Schlader is being recognized for her outstanding performance during the week of Aug. 31-Sept. 5.

Schlader’s consistent bat keyed Marian to four victories last week and extended the Crusaders’ win streak to eight games. She hit .727 (8-for-11) with three doubles, two home runs and registered four two-RBI contests. Schlader, who slugged 1.545,  opened with a 3-for-3 (double, run) outing against Bellevue East. The senior outfielder homered in wins over Lincoln Northeast (2-for-2, run) and Norfolk (2-for-3). In the latter contest, Schlader also doubled and scored twice.

every Monday during the fall season. During the spring campaign, a player from each of five separate high school regions is selected.