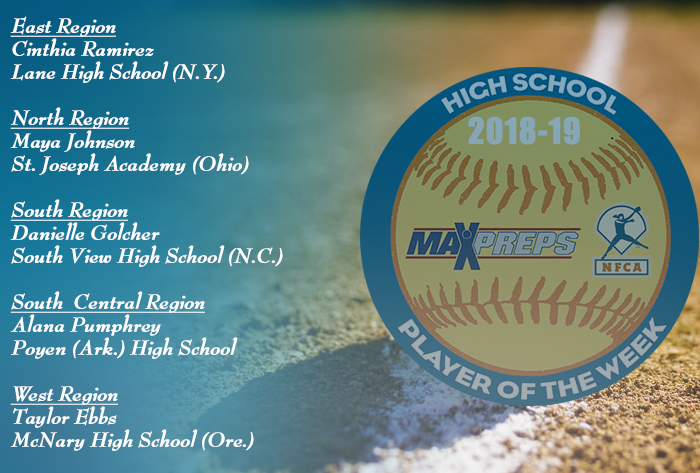 East Region
Ramirez clubbed four home runs, drove in 10 and slugged an astronomical 3.200 in a pair of wins for the Knights. Four of her five hits left the yard as she was a perfect 5-for-5 at the plate with four walks and five runs scored. Ramirez homered in her first game of 2019 and drove in four versus Far Rockaway. She capped off the week going 4-for-4 with three round tripper, six RBI and five runs scored against Hillcrest.

North Region
Johnson posted three complete-game shutouts and struck out 40 batters keying the Jaguars to a perfect opening week. Highlighting the week was a season-opening no-hitter against Independence as she fanned 13 in a 2-0 triumph. She struck out a week-high 16 in a two-hit blanking of West Greene, while striking out 11 in a three-hit shutout of Oak Glen. For the week, Johnson did not walk a batter and held her opposition to five hits and a .071 batting average.

South Region
Goucher was a perfect 7-for-7 at the plate with three home runs, nine RBI and an eye-popping 2.571 slugging percentage. She added two doubles and recorded a 1.000 on-base percentage. Goucher was 4-for-4, clubbed two long balls and drove in four runs against Westover. She followed that by knocking in five of her squad’s six runs against Ashley. She homered and doubled in the defeat.

South Central Region
Pumphrey led the Indians to three wins last week, hitting .889 (8-for-9) with two doubles, three home runs and 15 RBI. She posted a .900 on-base percentage and slugged 2.111. Pumphrey left the yard twice, her second multi-homer game of the season, and drove in six runs against Cutter-Morning Star. The senior went 3-for-4 with a double and four RBI versus Bismarck. Pumphrey doubled, homered and recorded five RBI in a win over Magnet Cove.

West
Ebbs hit .900 (9-for-10), with a triple, two home runs and 13 RBI to help the Celtics to a 3-0 week. She also scored eight runs, slugged 1.700 and posted a .909 on-base percentage. In her second game of the week, Ebbs was 4-for-4 with both of her long balls, eight RBI and three runs scored against Roosevelt. She went 3-for-3 and drove in four runs versus Century. Ebbs capped off the week with a triple and three runs scored against Grant.