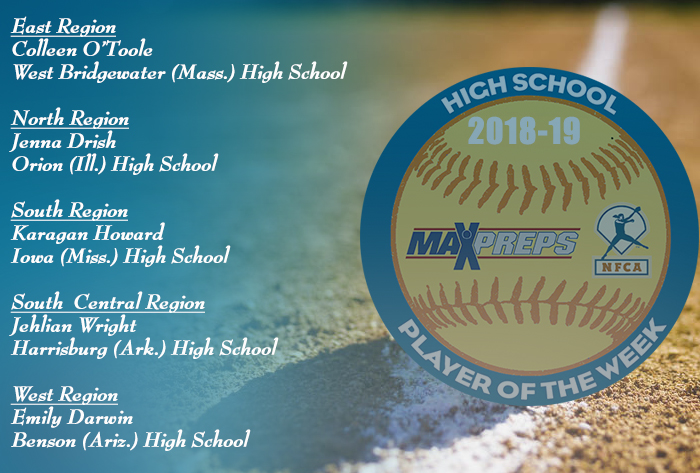 East Region
O’Toole was a perfect 11-for-11 with 14 RBI in her first two games of the 2019 campaign. She recorded a pair of doubles, two triples and two home runs, attributing to her 2.090 slugging percentage. O’Toole opened the season with a 6-for-6 outing against Bristol-Plymouth RVT in which she tripled twice, homered, drove in four runs and scored three times. O’Toole posted 10 RBI with two doubles and home run and three more runs scored versus Sacred Heart.

North Region
Drish clubbed five home runs, at least one in each contest, scored 12 times and drove in 16 runs keying the Chargers to four wins last week. She left the yard twice, recorded six RBI and scored four runs in a triumph over Abingdon. Drish drove in four runs versus Morrison and Monmouth-Roseville, scoring four times against the Mustangs. The sophomore finished the week batting .846 (11-for-13), slugged 2.307 and recorded a .875 on-base percentage.

South Region
Howard was 8-for-8 with two doubles, a triple, two home runs, nine RBI, seven runs scored and a 2.250 slugging percentage. Hitting for the cycle versus Lake Arthur, she finished 5-for-5 (two singles, double, triple, home run), driving in five runs and scoring five times. Against Lake Charles College Prep, Howard was a triple short of consecutive cycles. She finished the contest 3-for-3 with four more RBI and two runs scored.

South Central Region
Wright hit .875 (7-for-8) with two doubles, three home runs, 10 RBI and six runs scored. She slugged 2.250 and drew four walks, attributing to her .917 on-base percentage. Wright homered in each of the Hornets’ three wins. She drove in four runs and scored twice versus Cave City. Wright was 4-for-4 with a pair of doubles and three RBI against Newport and also recorded three RBI versus Tuckerman.

West
Benson homered four times, drove in 16 runs and slugged 2.777 in three contests last week. She was 8-for-9 (.889) at the plate with a double, two triples, 10 runs scored, five walks and a .929 on-base percentage. Benson tripled, homered and registered six RBI versus Bisbee. She drove in five and scored five times with two long balls versus Tombstone, while the sophomore was single short of the cycle, which included a grand slam, with five RBI in a win over Santa Cruz Valley.